A new book from Angelico Press, which includes short pieces by me, and by many very distinguished people as well! Get it from Amazon.co.uk or Angelico direct.
From Benedict’s Peace to Francis’s War: Catholics Respond to the Motu Proprio Traditiones Custodes on the Latin Mass
Edited by PETER A. KWASNIEWSKI 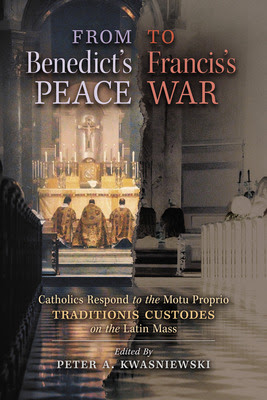 406 pages Paper (ISBN 978-1-62138-786-2): $22.95 / £18.00
Cloth (ISBN 978-1-62138-787-9 ): $32.00 / £24.50
An anthology of essays and articles by prelates and pastors, theologians and canonists, philosophers and cultural figures—including:  Cardinal Walter Brandmüller • Cardinal Raymond Leo Burke
Cardinal Gerhard Müller • Cardinal Robert Sarah
Cardinal Joseph Zen • Archbishop Thomas Gullickson
Archbishop Carlo Maria Viganò • Bishop Rob Mutsaerts
Bishop Athanasius Schneider • Msgr. Charles Pope
Dom Alcuin Reid • Abbé Claude Barthe
Fr. John Hunwicke • Michael Brendan Dougherty
Ross Douthat • Edward Feser • Michael Fiedrowicz
Peter A. Kwasniewski • Phil Lawler • Martin Mosebach
George Neumayr • Joseph Shaw • and many others
Already on July 16, 2021, the reactions to Pope Francis’s severe restrictions on the traditional Latin Mass in Traditionis Custodes were like a river in full flood: articles, essays, interviews, podcasts—everywhere and from every point of view. An emotional, spiritual, intellectual dam had broken and the waters of discourse poured forth across the world. The sheer volume of writing occasioned by ­Traditionis Custodes is unlike anything seen in the history of papal documents—testimony to a neuralgic subject on which arguments proliferate and passions run high. The two-month period following the release of the motu proprio gave proof that the traditionalist movement was no fringe phenomenon, but something that had gained significant strength and sympathy during the relatively peaceful years from 2007 to 2021 (the “Pax Benedictina” to which the book’s title refers). The purpose of this volume is to gather in one convenient place some of the finest and most appreciated essays and articles published in the period from mid-July through September of this fateful year, 2021—not only from America and England (although these predominate), but also from other nations: France, Germany, Switzerland, the Netherlands, Italy, Spain, Argentina, Poland, Kazakhstan, and China. This book is not, and makes no pretense of being, a presentation of “both sides of the argument.” It offers a variety of critiques of this profoundly unwise and unpastoral decree, which suffers from incoherent doctrinal foundations, grave moral and juridical defects, and impossible ecclesiological implications.
Support the Latin Mass Society
Posted by Joseph Shaw at 3:40 pm