Feb 19th for the next Juventutem London Mass

The next Juventutem London Mass  will take place, as usual, in St Mary Moorfields in the City of London (the postcode is EC2M 7LS: click for a map), on the last Friday of February, 19th, at 7:30pm. It will be followed by a social gathering with food (pizza) in the basement of the church for young people. (Linke to the Facebook event page.)
It will be Sung Mass with polyphony, and the intention is for persecuted Christians around the world: naturally, we think above all of the Middle East and West Africa. And India of course, South East Asia, and Western Europe...


As always the Mass is sponsored by the Latin Mass Society, and with the kind permission of Canon Peter Newby, the Parish Priest. 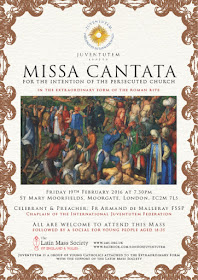