A new editor for Mass of Ages 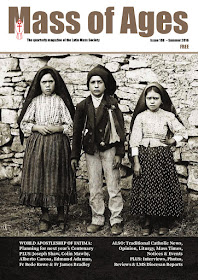 The forthcoming edition of Mass of Ages, the magazine of the Latin Mass Society, will be the last edited by Dylan Parry. It has been great working with him, for sadly too short a time, but we cannot regret his reason for moving on: a desire to test a vocation to the religious life. He will be leaving his editorial position at Oremus, Westminster Cathedral's magazine, at the same time.

Recruiting is always a chancy business, but I feel we have been exeedingly fortunate to have attracted the attention of Tom Quinn, who has been editing magazines for more than 30 years, and has lots of ideas for Mass of Ages.

The magazine has enormous potential, and it requires both skill and a lot of hard work to make the most of such opportunities. With the help of Tom Quinn, we'll take it to the next level.

The LMS has appointed Tom Quinn as Managing Editor of Mass of Ages magazine. Based in London, Tom comes to his new role with many years’ experience behind him as an editor, photographer and writer. He has worked on magazines covering a variety of subjects, as well as contributing to mainstream newspapers. With this wealth of experience, and being a Catholic who has knowledge and enormous sympathy for traditional practices, he is suitably qualified to build on the very successful work done by Dylan Parry, our outgoing Managing Editor.

Dylan leaves us to test a vocation to the Religious Life. The next edition of Mass of Ages, due out in August, will be his last and we take this opportunity to thank Dylan for his work in making Mass of Ages appeal to an ever-increasing readership and assure him of our prayers.

Joseph Shaw, Chairman of the Latin Mass Society, said, 'The Society is very grateful to Dylan for his work on the magazine, and we assure him of our prayers for his novitiate. We are very fortunate to have found such an experienced and highly skilled replacement in Tom Quinn, and look forward to working with him.'