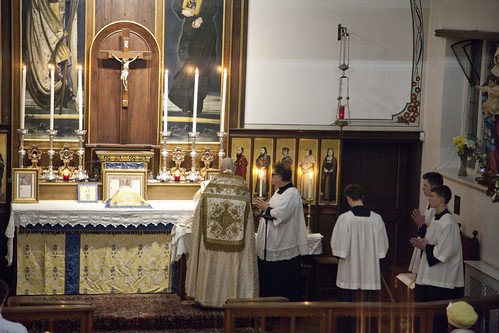 A Sung Mass celebrated by the Priest in Charge, Fr John Saward, at SS Gregory & Augustine's in Oxford. It was well attended. 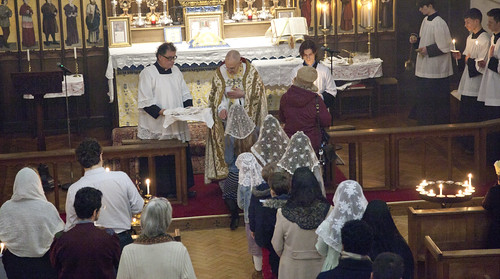 It was accompanied with chant and polyphony led by Tom Neal and Dominic Bevan.
Read more »
Posted by Joseph Shaw at 6:06 pm No comments:

The Latin Mass Society is pleased to present this set of short videos giving the texts with which those learning to serve the Traditional Mass need to familiarise themselves, setting the written text alongside an audio recording. This is presented in the context of the Latin Mass Society's sodality for Altar Servers, the Society of St Tarcisius.
The Collect, Epistle, and Gospel used are taken from the Votive Mass of Our Lady used 'per annum.'
In these videos the texts are said as slowly and distinctively as possible, to assist servers and others unsure of the principles of Ecclesiastical Latin pronunciation. In Mass these texts should be said in a more flowing way.
The texts are taken from parts of the Mass where the server has to make responses; there are separate videos for different parts of the Mass. Links to all the videos can be found under the Resources tab here.
We would like to thank Fr John Saward, Priest in Charge of SS Gregory & Augustine's for his assistance with these. The responses were made by Joseph Shaw, Chairman of the Latin Mass Society.
Support the Latin Mass Society
Posted by Joseph Shaw at 9:41 am No comments:

Cross-posted from Rorate Caeli.
It is good to see Latin Courses focused on the Church's Latin springing up in different places. This one is online and can be done from anywhere. The Latin Mass Society is offering an 80% subsidy for clergy and seminarians from England and Wales to do it; in other places it could be regarded as a parish expense, or other local groups might like to consider helping their priests meet the cost. After all, Catholic priests are supposed to know Latin, not only for the liturgy, but for their understanding of theology and canon law. 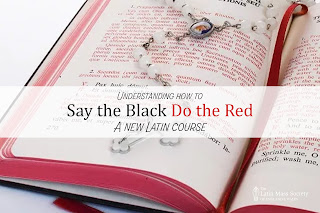 We are delighted to announce dates for the spring and summer.

Talks take place in the basement room at Our Lady of the Assumption Warwick Steet. Please enter it from the Golden Square side:

24 Golden Square, London, W1F 9JR
Some titles to be confirmed.

Support the Latin Mass Society
Posted by Joseph Shaw at 2:53 pm No comments:

The problem of religious traditionalists

My latest piece in The Critic draws a parallel between Catholics attached to the traditional Mass and Anglicans attached to unspoilt Victorian churches, and the contrast between the way these are treated, and the way those who champion other aspects of traditional culture are treated.
Whereas those who preserve cultural traditions are generally regarded in a positive way, religious traditionalists are often regarded, by their co-religionists, as dangerously misguided or mentally ill.
Read it here.
Support the Latin Mass Society
Posted by Joseph Shaw at 7:08 pm 1 comment:

The Latin Mass Society is delighted to announce two new Patrons: Sir Edward Leigh MP, and John Smeaton, former Chief Executive of the Society for the Protection of Unborn Children.

Sir Edward Leigh has sat as a Member of Parliament for Gainsborough since 1983. He is among the most respected Catholic members of Parliament, and has served as a Secretary of State and held many important roles in Parliamentary committees. He was knighted in 2013, is an Officer of the Légion d’honneur of France, and a Commander of the Order of the Star of Italy.

John Smeaton was Chief Executive of the Society for the Protection of Unborn Children (SPUC) from 1996 to 2021, and is the foremost pro-life campaigner in Britain. In 2013, he received the Cardinal John J. O’Connor Pro-Life Award from Legatus, an international organization of Catholic business leaders; and in 2015, he received the first Fr Paul Marx Award from Human Life International. He now leads Voice of the Family, which was founded in 2014 to defend Catholic teaching on the family, and publishes Calx Mariae magazine.

Read more »
Posted by Joseph Shaw at 9:00 am No comments:

Vacancy for a General Manager at the LMS

The Latin Mass Society has a permanent office in London and a small paid staff: two full-time, one part-time, plus two freelancers. Our senior member of staff, the General Manager, holds a full-time position with important responsibilities, for the Society's major events, its online shop, and a lot of other things. Our current GM, Stephen Moseling, has been with us for about six years, and having reached pensionable age he is retiring. It has been a pleasure for me to work for him, and the Society has benefitted enormously from him experience and dedication. Our online shop, most obviously, is very much his creation, and has grown enormously over the last few years. Stephen has most recenty overseen a painless move of office, to a larger space.

Our present General Manager, Stephen Moseling, will reach retirement age this year and has taken the decision to retire at the end of March, therefore we are looking for a replacement.

The purpose of the role is to support the work of the Society’s volunteer activists, manage an office with a small staff, online shop, and website, and to be the first point of contact for many enquiries to the Society.

The General Manager reports to the Committee of the Society under the Terms of the Constitution, but will deal directly with the Chairman, Secretary and Treasurer on a day-to-day basis to ensure the efficient administration and development of the Society.

The Society's Bookkeeper and IT specialist, Office Assistant, the Editor of the Society’s magazine Mass of Ages, and the Communications Officer, report to the General Manager.

Read more »
Posted by Joseph Shaw at 5:56 pm No comments: