It took some time for everyone to adjust to the violent overthrow of thirteen years’ pastoral arrangements, policies, and attitudes by Pope Francis’ Apostolic Letter Traditionis Custodes (TC), not least because of the way it was promulgated, to come into immediate effect, on a Friday. The implications needed thinking through, canon law advice needed to be considered, the practical possibilities in implementation needed to be worked out. Just as things were settling down, another document came out: the Responsa ad dubia, which presented itself as an interpretation of TC, but in fact purported to add a whole lot of new obligations. The adjustment needed for this was also considerable, exacerbated by the fact that it was promulgated a fortnight before Christmas.

Bishops and papal apologists, in their different ways, have worked like Trojans to make sense of this and to put it into practice. I don’t envy either group. Just as the implications of the Responsa seemed to have been straightened out, at least to the satisfaction (if that is the right word) of various Bishops’ Conferences, official policy has been thrown once more into reverse gear. The latest decree, applicable to the Priestly Fraternity of St Peter (FSSP), puts an entirely different spin on the whole issue of the Traditional Mass and its place in the life of the Church.

Read it all there.
Support the Latin Mass Society
Posted by Joseph Shaw at 11:17 am No comments:

My latest for Catholic Answers.

Until the reform of the calendar in 1969, Latin Rite Catholics observed a period of preparation for Lent: the three Sundays of Septuagesima, Sexagesima, and Quinquagesima. The names are derived from Latin numbers: Lent is quadragesima, “forty,” septuagesima “seventy,” sexagesima “sixty,” and quinquagesima “fifty.” It is a (very rough) countdown to Easter.

As in Lent, during this period, the liturgical color is violet, and the readings and prayers refer to our need for conversion and penance. This season is actually older than Ash Wednesday; it is discussed in the writings of Pope St. Gregory the Great, who died in the year 604. There is a similar pre-Lent season in the calendars of the Eastern churches; it was preserved by the Anglican Book of Common Prayer and in some Lutheran calendars; it has been restored in Divine Worship, the liturgy of the Ordinariate; and it is still found in celebrations of the pre-Vatican II Mass, the usus antiquior. It is the post-Vatican II calendar, in fact, that is unusual in doing without Septuagesima.


Support the Latin Mass Society
Posted by Joseph Shaw at 10:00 am No comments:

More on the venue.

2nd April, St Dominic's Haverstock Hill, from 11 am to 4pm (please come to the parish hall on the left of the church). Booking page. Note the new venue.

21st May, St Mary Moorfield, from 10:30 am to 4pm. Booking page.
All these events will be accompanied by Vestment Mending Days with the Guild of St Clare, in the parish halls of these two churches. This means that different members of a family can take part in both on the same day. 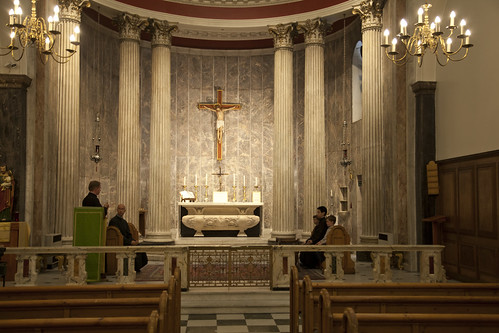 Cause of Celebration, 2: a Successful Sewing Retreat 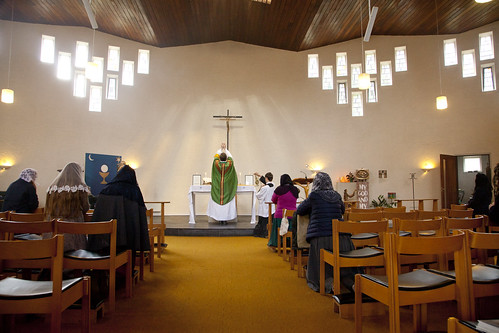 From last Friday to Sunday, the Guild of St Clare Spring Sewing Retreat took place. The Guild is affiliated to the Latin Mass Society. They have two Sewing Retreats a year and booking for the next one can be done here.
This was the first time we have used this venue, Park Place Pastoral Centre in Hampshire, and we will be using it for the next retreat as well, and for the residential Latin and Greek Course the LMS is running in August (details).
The Retreat was fully booked, and led by Fr Stephen Morrison of the Norbertines at Chelmsford. Mass before lunch on Sunday, which I attended, was sung, with the assistance of two of the participants.
The retreat was a huge success and we are grateful to Fr Morrison and to the staff at Park Place. 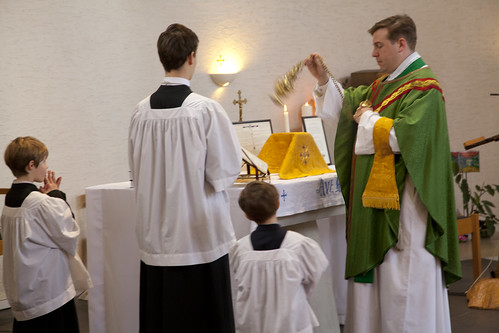 Support the Latin Mass Society
Posted by Joseph Shaw at 2:10 pm No comments:

Cause for Celebration, 1: a reception into the Church and High Mass in Oxford 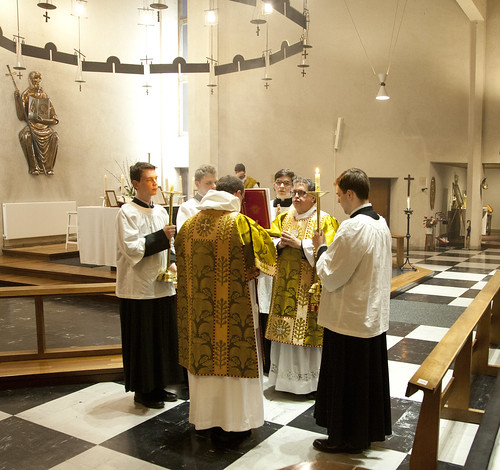 Last evening we had a very special Mass at Holy Rood in Oxford. It was preceded by the reception into the Church (and Confirmation) of a University student, and by way of celebration we had a really splendid Mass: High Mass with deacon and subdeacon, a polyphonic choir singing Palestrina, and an organist. We also had a splendid team of servers.
Read more »
Posted by Joseph Shaw at 7:21 pm 1 comment:

Confirmations, the SSPX, and Alessandro Manzoni

One of the greatest Catholic works of literature, of any age and language, is Alessandro Manzoni's novel I Promessi Sposi: the Betrothed. Among the characters is Frederick, Cardinal Borromeo, of Milan, the nephew of St Charles Borromeo; the simple village parish priest, Don Abbondio, and the engaged couple, Renzo and Lucy.

In the opening pages of the book a powerful local landowner threatens Don Abbondio with death should he marry the young couple; he has designs on Lucy. The couple attempt to force the issue, by contracting marriage before the priest as an unwilling witness. This would be recognised by the Church, under the canon law of the day, as valid but illicit.

“But these persons who have told your lordship these things, have they not also told you that they introduced themselves treacherously into my house, for the purpose of compelling me to perform the marriage ceremony, in a manner unauthorised by the church?”

“They have told me, my son; but what afflicts and depresses me, is to see you still seeking excuses; still excusing yourself by accusing others; still accusing others of that which should have formed a part of your own confession. Who placed these unfortunates, I do not say under the necessity, but under the temptation, to do what they have? Would they have sought this irregular method, if the legitimate way had not been closed to them?”