Over the last few days I've witnessed the most extraordinary episode of cyber-bullying I ever hope to see. I've come to this late; I realise now it has been going on for months. Looking into it, with increasing incredulity, I have seen numerous examples of bullying which would be extreme in a dysfunctional school playground, but where the bullies present themselves, not just as Catholics, but as Catholic bloggers: people who go to some thought and care, one would assume, in what they say and do, acting in the public eye as identifiable Catholics. Among other things they ridicule their victim's appearance, and call her 'Iggy Pop'. Here is just one delightful trio of tweets from one of them; I have erased the identity of the writer. (With Twitter, the bottom message comes first.)

Can you guess what the victim's alleged crime was? In a nutshell, cyber bullying. The actual evidence for this is lacking, but the claim is that, using false or anonymous identities, she attacked others on-line.

But hang on a minute: are her critics against cyber bullying, or in favour of it?

I am not interested in the truth of the original allegations, or the identity of any of the parties involved. I just want to draw attention to this as a general issue. We all know how mobs can go berserk and lynch innocent people. (Shakespeare gives a brilliant example in Julius Caesar.) We may have seen references to twitter-storms of people going berserk and pouring vitriol on even rather mild critics of very popular people, like Steven Fry. But here we have a small, albeit strongly mutually-reinforcing, group of people, no more than half a dozen, ganging up to attack a pregnant woman, in a way which would be completely wrong even if she had been a serial killer, and these people are simultaneously claiming to be Catholic. I never knew what Pharisaism was until now. The two main protagonists have blogs which they clearly think are a cut above the average - oh-so-clever, oh-so-sophisticated, giving their wonderfully deep views on every issue to the punters, and all terribly, terribly orthodox of course. 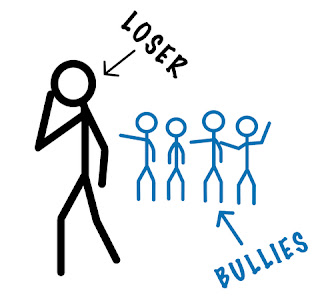 Truly, there are few crimes which Catholics have not committed. We are not the saved; we are sinners in need of salvation. But this is a serious matter. Bullying like this needs the active collaboration of a few, and the passive cooperation of many. It is very hard to intervene when these things are going on without making it look, to the next person coming upon the discussion, like a sack of ferrets throwing insults at each other. But we can support the victim in many ways, and withdraw our support from the bullies. The systematic attempt to cause a breakdown by needling and insulting, which I remember so well from school, is grave matter for adults. Calumny and detraction, about serious issues of character, is grave matter. As we all know, those who have damaged another's reputation, even accidentally, are obliged in justice to do what they can to repair it. In a case like this this means public apologies and retractions. I know that is very hard to do, but the great moral theologians who've turned to on-line bullying as a recreation will know, I am sure, that this will be on their consciences until they do this. Alas, it is not a matter of the private forum: it is out in the public forum.

We must all repent of our on-line sins. We have all been too swift to condemn, too busy to check facts first, too eager to jump on a band-wagon, too busy or too afraid to stand up for truth and justice. I hope this sorry example will make us all more vigilant, and not just be the first of many such disedifying episodes. If it is the latter, then alas for Catholic blogging.
Posted by Joseph Shaw at 2:22 pm