I have a letter published in the Catholic Herald this week, responding to an article by Melanie McDonagh about preparation for First Confessions for children. It was a good article, pointing out the dangers of a watered-down approach to Confession ('Catechsis with kid gloves'), but, perhaps feeling that a concession was necessary to the liberal point of view, she made a strange assertion.

'The good thing about this reception of the sacrament [an informal approach] is that there's nothing that might put a child off doing it again. The problem is that I'm not quite sure that they are sufficiently impressed with the notion that they should be doing it again. I can see that contemporary children might not go for old aspects of penitential pedagogy such as the distinction between mortal and venial sins, but I'd have been all for removing the kid gloves to the point of making the child clear that he should be going to Confession... regularly...'

I disagree that stopping children using an easy formula like 'Bless me Father...' to start them off is a good thing; such things can be very useful. People are often embarrassed when they go to confession; this is not the moment to force them to be creative. However, if you are going to make a concession to the liberal critique of the 'old ways', please don't pick the 'distinction between mortal and venial sins'! 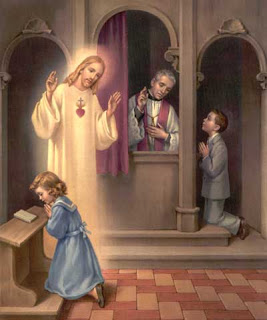 I was interested to read Melanie McDonagh's critique of some preparation for First Confessions by children (Charterhouse, 30/3/12), but was puzzled by her claim that 'contemporary children might not go for... the distinction between mortal and venial sins'. Since by Canon Law (Canon 989) and sacramental theology it is imperative we confess all mortal sins, but not venial ones, a grasp of the distinction is essential to anyone wishing to make a proper use of this Sacrament.

I don't think children are born different today than in former ages; the difference is in how they are treated. If catechists today shield children from facts which will help them make a good confession, then they will mould young Catholics whose First Confession may well, sadly, also be their last.

St Ignatius of Loyola, between his conversion and his study at the University of Paris in preparation for the founding of the Jesuits, used to spend a lot of time catechising children. In Salamanca he was accused of teaching error on the definition of Mortal Sin. He was investigated and acquitted, but told not to teach on the subject. He refused to catechise children without giving them the definition of Mortal Sin, and moved on to another jurisdiction.

It is essential for children, and everyone, to know the difference between Mortal and Venial Sin. It is not just a bit of scholastic flummery: it helps stop the zealous from becoming scrupulous, it helps stop the fallen from making things worse; it allows everyone to know when they really must go to Confession before their next reception of Communion. If we deny children this knowledge, we are not doing them any favours.

Get yourself to Confession this Easter Season. And have a look at the Catechism of the Catholic Church on the subject, para 1854 onwards.


Mortal sin is sin whose object is grave matter and which is also committed with full knowledge and deliberate consent.
Posted by Joseph Shaw at 10:00 am