This regular event attracted 300 participants this year. The Blessed Sacrament, under a canopy and proceded by a thurifer, was carried in procession from the Oxford Oratory, via Blackfriars, to the Catholic Chaplaincy. The faithful sang hymns accompanied by a brass band. There was a sermon at Blackfriars and Benediction at the Chaplaincy.

Posted by Joseph Shaw at 5:31 pm No comments:

On Saturday 3rd June, the second Latin Mass Society Pilgrimage to Oxford took place, in honour of the Catholic Martyrs who were executed in the city. In 2005 we processed to the place where the four martyrs of 1589 were hanged, drawn and quartered; in 2006 we 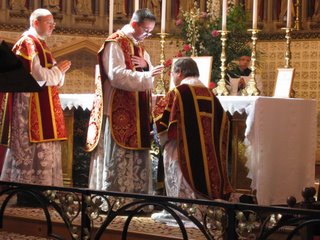 processed to the site of the Castle gallows, outside Nuffield College, where Blessed George Napper (or Napier), was similarly hanged, drawn and quartered in 1610. 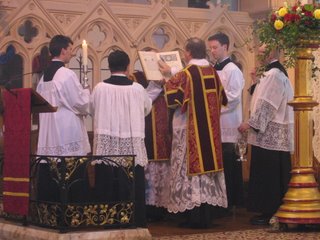 Napper was born in Holywell Manor in 1550, and educated in Corpus Christi College, before being ejected (in 1565) for recusancy. He later spent nine years in prison in London for the same reason (until 1589), before joining the seminary at Douai, being ordained (1596), and coming on the English mission (1603), to bring the Mass and other sacraments to the Catholics of his home county. He was arrested near the village of Kirtlington in July 1610, imprisoned in Oxford Castle, and executed on 19th November 1610. He was beatified in 1929.

The Pilgrimage began with Solemn High Mass in the Church of St Aloysius, the Oxford Oratory, at 11.15. The celebrant was Fr Dominic Jacob of the Oratory, assisted by his confreres Fr Jerome Bertram (deacon) and Br Anton Webb (subdeacon). Mr Gordon Dimon was MC, and led a team of seven servers. This seems to have been the first Traditional Solemn High Mass in Oratory since 1970, and was a truly magnificent occasion, attended by more than 80 people. 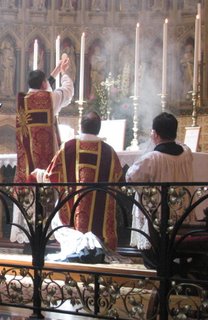 provided by the Oratory Choirmaster, Mr Edward de Rivera, and members of the Oratory Choir. The Ordinary of the Mass was the Mass for Five Voices by the great William Byrd, whose music brought so much comfort to Catholics in the period of the Elizabethan persecution. He was born in Lincoln in 1543? and died at Stondon Massey, Essex on 4 July 1623. His output of Latin works: Motets, Gradualia etc was considerable to say nothing of his secular songs and madrigals and English settings for the Reformed Church. Despite his steadfast devotion to his Catholic Faith, he was a great favourite of Queen Elizabeth.

At 2pm, after a break for lunch, Br Anton Webb, assisted by Gordon 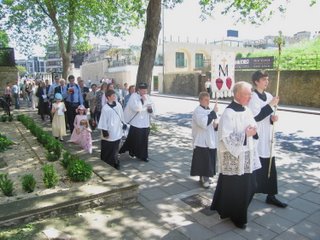 Dimon and three acolytes with processional cross, silk banner, and megaphone, led a procession from the top of New Road, past the Castle, to the site of Bl George Napper’s execution, approximately where the Memorial Gate of Nuffield College now stands. Forty people came on the procession, which was an impressive witness to the Faith. At Nuffield a large gallows, with a single noose hanging from it, marked the procession’s goal, where we completed chanting the

Litany of the Saints. We paused there while a contemporary account of Napper’s execution was read out, and then processed back to the Oratory, singing the Te Deum, the Canticle of the Three Young Men, and vernacular hymns (including Faith of Our Fathers), and reciting five decades of the Rosary. 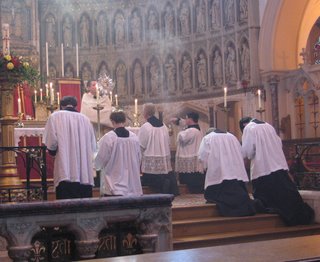 At 4pm Fr Dominic Jacob celebrated Benediction of the Blessed Sacrament in the Oratory, bringing the pilgrimage to a close. Thanks are due to all those who came to honour our glorious predecessor in the Faith, and particularly to the Fathers of Oxford Oratory, who gave so much of their time as well as their church for this occasion.

I'm delighted to say that this important local event was covered by the Catholic Herald, and even got a mention in the Oxford Times.

Posted by Joseph Shaw at 5:30 pm No comments:

The annual 'Walk for Life', organised by the Oxford branch of LIFE, took place in the streets of Oxford on Saturday 13th May, in support of the rights of the unborn. It started at the West end of Broad Street, and ended at the Catholic Chaplaincy, where a hot lunch was laid on. 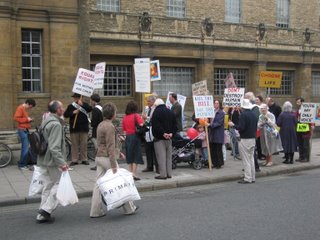 Posted by Joseph Shaw at 5:28 pm No comments:

On Saturday 11th March, the renowned Gregorian Chant expert Dr Mary Berry prepared a group of more than twenty singers, including the incipient traditional scholas of both and , to sing at Benediction and Mass, in the of & Augustine, . Dr gave a fascinating introduction to the history of the Chant and its notation, and proceeded to explain the principles of interpretation of early manuscr 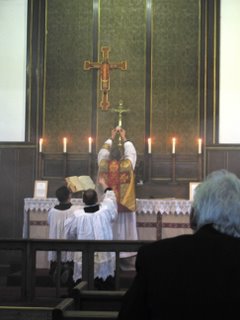 ipts, and the symbols used in the Liber Usualis. I am sure we all learnt a great many things we never knew we didn’t know, as well as being given very practical help and coaching in singing the chosen pieces. After a hearty hot lunch provided by Lucy Shaw at the Presbytery, we prepared the very beautiful Mass IV, and the propers for the Mass of St Gregory the Great, who, not content with converting the English, gave his name to the Chant and, with St Augustine of Canterbury, is the patron of the church. Mass was expertly MCed by David Forster, and the schola, conducted by Dr , was a credit to the efforts of the singers, who had come from as far away as Powys to attend. Dr ’s energy is an example to us all, and we are tremendously grateful for her generosity with her time and expertise. Thanks are also due to Dr John Caldwell, the organist, and above all to Fr John Saward, who not only lent his charming church and Presbytery to us but celebrated the Benediction and Mass we sang at. The day was sponsored by the Latin Mass Society, and was a great boost to the cause of Gregorian Chant in and far beyond it.

Posted by Joseph Shaw at 5:27 pm No comments:

Society of St Catherine of , Liturgical Conference in

Ever Directed toward the Lord. . .

The Love of God in the Liturgy of the Eucharist past, present, and hoped for

The Society of St Catherine of held a Colloquium (Friday 28th October), followed by a one-day Conference (Saturday 29th October), in in 2005. The Colloquium began with a splendid Traditional Solemn High Mass celebrated in Blackfriars, , and concluded with Choral Evensong in Merton College Chapel, at which Vincent Nichols, the Archbishop of Birmingham, preached. The Conference began with Mass celebrated by Archbishop Nichols (Novus Ordo).

The colloquium and conference were attended by many distinguished invited speakers, including Eamon Duffy, Jonathan Robinson, Lauren Pristas, Laurence Hemming, Paul Bradshaw, and Susan Parsons.
Posted by Joseph Shaw at 5:26 pm No comments: 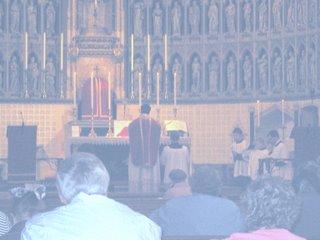 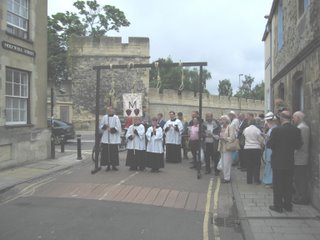 Posted by Joseph Shaw at 5:24 pm No comments: