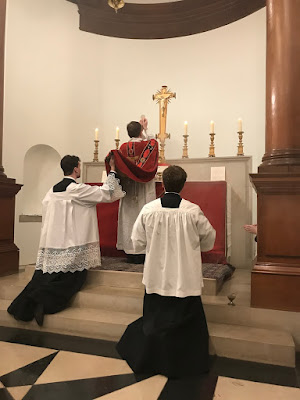 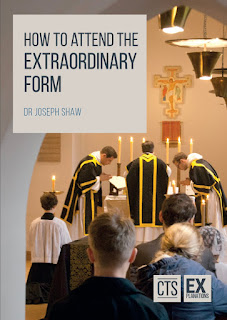 A new booklet from the Catholic Truth Society is coming out on the Traditional Mass. It is available for pre-order now and will launch on 3rd April. It is the standard pocket-sized CTS production, and priced at £3.50.

It is by me. Here is a little excerpt:


... attending the Extraordinary Form can be understood as the privilege of seeing, from a distance, something of great solemnity and holiness. The things which contribute to the distance between the priest and his doings, and the congregation, are essential to creating the corresponding sense of the sacred. The fact that we can’t see things clearly because the priest has his back to us; the use of Latin; silent prayers; the exclusion of the laity from the sanctuary, except for vested servers: all these things serve to remind us that we are looking in at something very special, from the outside. 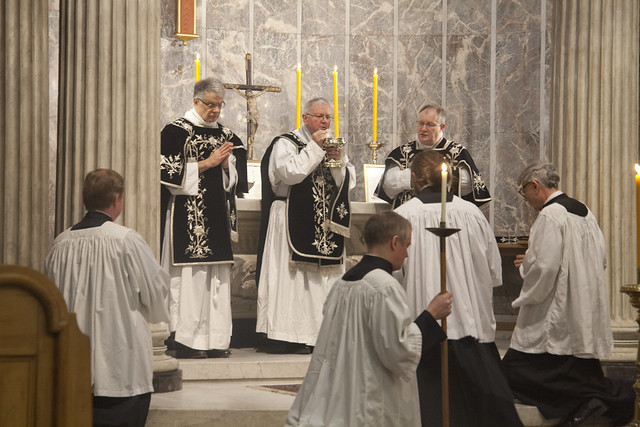 Last Saturday Mgr Gordon Read, National Chaplain of the Latin Mass Society, celebrated a High Mass of Requiem for the late composer Colin Mawby, who had been a Patron of the Society.

It took place in St Mary Moorfields in the City of London.

It was accompanied by Cantus Magnus under Matthew Schellhorn, with Officium Defunctorum by Victoria, and two motets by Colin Mawby: Jesu dulcis memoria and Hodie nobis de cœlo. 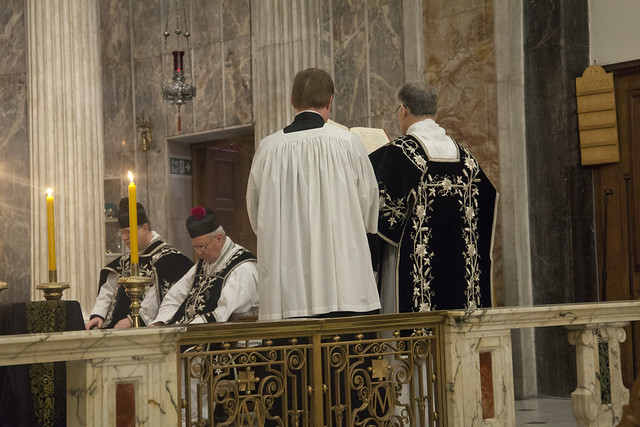 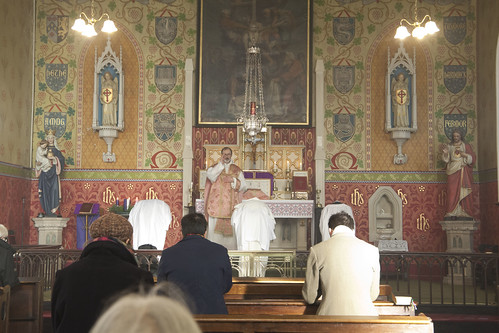 We have had some lovely Sung Traditional Masses in this historic church--the oldest Catholic parish church in Oxford, founded in 1839. And these will continue in 2020!


Quarterly Masses, Sung, at 11am, on the following: 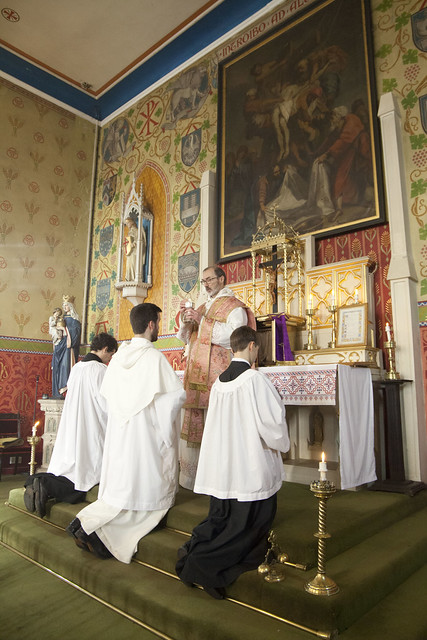 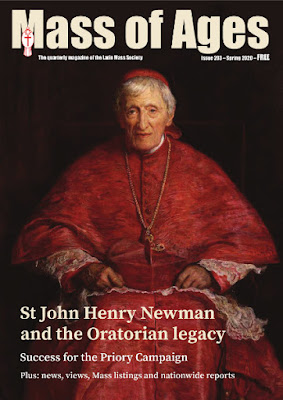 Posted by Joseph Shaw at 7:18 pm No comments:

The liturgical reform and 'the missions'

A key part of the argument for the liturgical reform was that it was needed for 'the missions'. What was never explained was why a reform which responded to objections from Enlightenment thinkers to the liturgical tradition was appropriate for cultures to which such objections were completely alien, and indeed incomprehensible. The Emperor Joseph II, Voltaire, and the like complained about excessive ritual, supposedly superstitious veneration of holy places, images, and objects, the obscurantist use of sacred languages, silence, and so on and so forth. What on earth have these concerns to do with traditional societies? Unless, perhaps, one imagines that they are Rousseauist 'noble savages', like the lovers of 'noble simplicity' imaginatively projected in the Early Church by liturgists.

Daniel Dolley put paid to such fantasies about the native peoples of South America in his excellent article in the Catholic Herald which I commented on here, and this weekend Dr Pia Joliffe has had a letter published in the same place about the traditional culture she studied in Thailand, the Karen.


SIR – It was with great joy and interest that I read Daniel Dolley’s article on “how to evangelise the Amazon” (Cover story, January 24).

Dr Dolley’s point that the Amazon communities are more traditional in their approach to gender roles, religion and ritual action than those who advocate on their behalf is also valid for the Karen communities in northern Thailand, where I did my own ethnographic fieldwork for my DPhil in International Development.

The usefulness of Latin

Letter published this weekend in The Catholic Herald.

On Richard Ingrams’ reminiscences of his classical education (‘The Perils of Latin’, Charterhouse, 7th Feb), it is indeed astonishing how much time many of our predecessors spent on Latin and Greek. It didn’t seem to do them much harm: this was, after all, the generation which invented the computer, space travel, and the nuclear bomb.

Cobbett’s rejection of learning ‘what can never be of any real use to any human being’ (quoted by Ingrams) is corrosive of a humane education. Even in the sciences, the vast majority of what children learn, once they get beyond the kindergarten level, is not going to be of direct use to them in adult life.

Read more »
Posted by Joseph Shaw at 2:33 pm No comments:

Reply to Prof Healy in Homiletic and Pastoral Review


Professor Mary Healy, a member of the Pontifical Biblical Commission, recently wrote a piece for the Homiletic and Pastoral Review on the 50th Anniversary of the Novus Ordo Missae: the 'Ordinary Form'. She wrote:

It has become common to blame today’s lack of Eucharistic faith and fervor on the revised rite. Critics rightly point to certain weaknesses such as collects that are less expressive of God’s majesty, and the omission of important biblical texts from the lectionary. Another unfortunate change is the elimination of the Octave of Pentecost, giving the impression of downgrading the great solemnity that culminates the Easter season. The primary problem, however, is not the reformed rite itself but its flawed implementation, due to poor — and, in some cases, catastrophically defective — theological and spiritual preparation among clergy and laity alike. Too often, the liturgical changes were accompanied by a downplaying of the notion of sacredness. A casual attitude toward the liturgy was fostered, and beautiful churches were “wreckovated.” Lukewarm liturgy has, tragically, obscured the authentic renewal called for by the Council itself.

Read more »
Posted by Joseph Shaw at 1:01 pm No comments:

The peoples of the Amazon need Christ

The ancient Greek historian Herodotus records a story about a young man who caused the accidental death of his brother. Fleeing from home, he was taken in by a king who performed the necessary rite of purification and took him into his own household. One day, out hunting with the king’s son, the young man accidentally caused the prince’s death. In despair, he took his own life.

What is the moral of this story? The king’s act of kindness was misjudged; the rite of purification was not sufficiently powerful; those whom the gods have chosen to afflict cannot be helped. Perhaps the young man had inadvertently offended some deity, a common occurrence in Greek myth. You can’t be too careful: Works and Days by Hesiod attempts to summarize omens and auspicious and inauspicious days for everything from getting married to planting beans. The result is a mind-boggling collection of material that, if taken seriously, would control one’s every action, with no guarantee of success. This is what life under paganism was like in ancient Europe, and it was to this world that the Church’s sacraments and spirituality were first directed.

Posted by Joseph Shaw at 5:59 pm No comments:

Talk on consent and sex eduction

A talk from last December.

The vocation to have children


The basic outlines of the Church’s teaching on family life, in terms of what we must on no account do, are clear, but we need to beware of the more subtle ways our thinking has been warped by our contraceptive culture. This is a hugely complex topic and I want to look at just one aspect of it: the attitude to large families.
It has become a joke, albeit a boring one, that many people can’t see a family of more than three children without having a dig at the parents. My lifestyle does not expose me to much of this but I did get a “You should get a TV” from a stranger recently, which was intended as light-hearted. (Actually, I’d rather have the children.) Such comments can be particularly upsetting when they come from fellow Catholics. No less annoying is the counter-pressure occasionally found in those pockets of Catholic society where larger families are more common. It is such a stupid thing to ask mothers if they are going to have another baby. Who knows what has been going on? Just don’t do it.
These opposing remarks have something in common, which is the odd way they hold parents to account for having or not having children, and see a certain family size as the right one for everyone: whether is it two children, six, or none. This is obviously absurd in ignoring the particular circumstances of different families, above all biological factors which are of no concern to complete strangers. But it also puts an artificial limit to family size, whether the limit small or large.
Carry on reading.