This was attended by Fr John Saward, priest in charge of SS Gregory and Augustine, a regular celebrant of the Traditional Mass in Oxford. Thanks to Le Forum Catholique, here are some pictures. 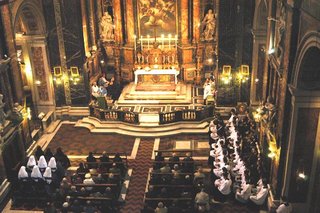 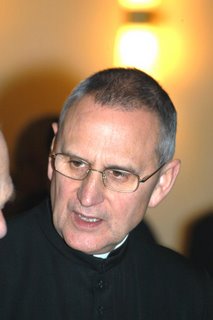 Posted by Joseph Shaw at 6:13 pm No comments:

This week's Catholic Herald carries a report on the Oxford CIEL Conference, with pictures of the liturgies celebrated in its course. Readers may be puzzled, however, to see that nowhere in the report does the paper mention that the Masses during the conference, including the Solemn Mass celebrated by Bishop McGough, auxiliary bishop of the Birmingham Archdiocese, were in the Traditional Rite. Do they find this fact embarassing?

Elsewhere in the same issue, the Catholic Herald reports on a 'Tridentine' Mass which took place in Parliament, celebrated by Fr Lang of the London Oratory. Joanna Bogle, filing the report, quotes Fr Lang as referring to the Rite as being 'new' in St Edmund Campion's day, and 'fresh from the Council of Trent'. I don't know what Fr Lang said, but the Mass celebrated by St Edmund was essentially the same as the Mass brought to England by St Augustine of Canterbury, 'freshly' codified by Pope Gregory the Great, but going back probably to Pope Gelasius. English customs diverged from the Roman ones over the Middle Ages, giving rise to the Sarum Use which was the subject of a previous post on this blog; however, the Roman Missal was used in its pure form by the Fransiscans, whose Masses in England and elsewhere do not seem to have attracted any adverse comment.

Mrs Bogle would do well to read, or reread, 'The Book of Margary Kempe'. The visionary Kempe lived Lyn, East Anglia, and travelled all over England, and to France, Rome, the Holy Land, and Germany. She had permission to receive communion fortnightly, and the Mass was at the centre of her devotional life. Nowhere does she express surprise or concern at the different rites she encountered, although the Gallican customs of France at that time would have been quite distinctive. The liturgical variety of her day was taken entirely for granted, and was not the source of the 'divisiveness' which opponents of the Traditional Mass so often worry about.

Above all, the Missal of Pius V would have been entirely familiar to her, since no element of it was composed 'fresh' at or after the Council of Trent, and nor was it imposed by legislative fiat in preference to the ancient customs of different religious orders and localities.
Posted by Joseph Shaw at 10:56 am No comments: