British Petition for the Traditional Mass

The Una Voce Federation (with help from the Latin Mass Society) has organised another petition in support of the Holy Father's initiative to liberalise the Traditional Mass. It's not a 'public' petition, but focuses on prominent signatories. Although it was prepared in a very short time, there are some interesting people on who were not reached by the Epiphany Declaration, such as Dr Mary Berry, the Gregorian Chant expert, and Fr John Saward, the theologian and Oxford Parish Priest. (And me too!)

Others include the Catholic campaigner Daphne Macleod (of Pro Ecclesiae et Pontifice), Prince Rupert Lowenstein (President of the British Order of Malta and of the LMS), the theologian Catherine Pickstock, the novelist Piers Paul Read, and Damien Thompson, the Editor in Chief of the Catholic Herald.

The full text of the petition and the signatures are here. Hat-tip to The New Liturgical Movememnt.
Posted by Joseph Shaw at 12:03 pm No comments: 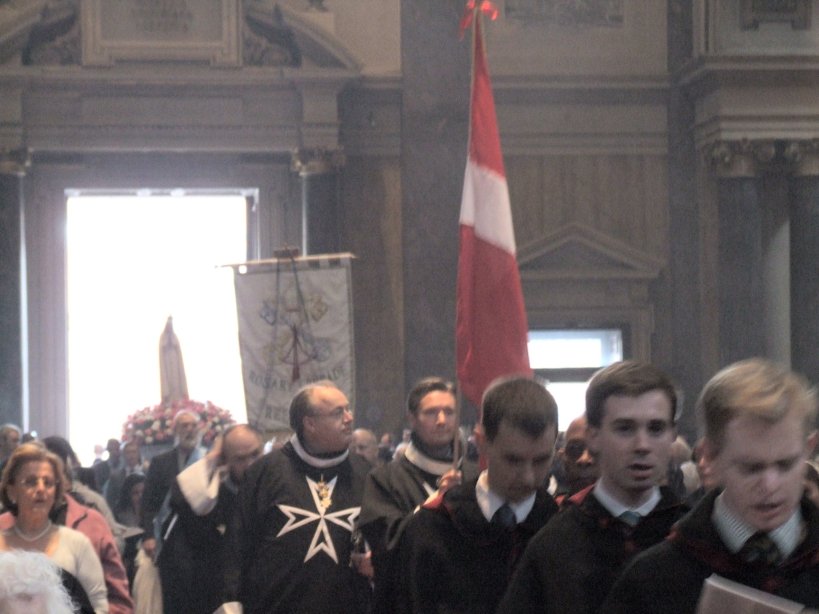 Society, celebrated his 50th birthday with a Mass and party at the London Oratory on Thursday. Here's a picture of him in the same place, during the Rosary Crusade, wearing the choir robes of the Order of Malta, of which he is a Knight of Magistral Grace; hat-tip to Hermeneutic of Continuity for this picure. IMHO, however, even better is Julian rendered in sugar-dough for his cake, which also shows him in his robes, accompanied by beagles (he is Master of a beagle hunt near Newbury), the Maltese Cross, the logo of his law firm, Penningtons, and the coats of arms of his county of birth and alma maters (school and college). A feast of heraldry, in fact. Well done to Lucy Shaw Cakes.

And many happy returns to Mr Chadwick!
Posted by Joseph Shaw at 5:47 pm No comments:

```The New Liturgical Movement blog has published this 'DECLARATION SUPPORTING ANY PAPAL INITIATIVE TO ALLOW THE FREER USE OF THE 1962 MISSALE ROMANUM'.

This is designed to parallel, for the English-speaking world, the similar declarations made in recent weeks by intellectuals and writers in Italy, France and Poland. Among the luminaries, from all parts of the Anglosphere, Britons who have already signed this include James Bogle, Fr Tim Finnigan, Dr Laurence Hemming, Fr Aidan Nichols (of Oxford University), Dr Susan Parsons, Joseph Pearse, Alcuin Read, and me!

The declaration recalls the petition presented to Pope Paul VI in 1971 to allow the continued use of the Traditional liturgy, which resulted in the 'English Indult'. This petition was signed by many prominent writers and intellectuals, by no means all Catholic, who saw the disappearance of the Traditional Catholic liturgy as a cultural calamity affecting the whole of society. The petitioners included Agatha Christie, Cyril Connolly, Kenneth Clark, Graham Greene, Cecil Day Lewis, Malcolm Muggeridge and Iris Murdoch.

Well done to Shawn Tribe of the New Liturgical Movement for organising this new declaration, and may it stiffen the resolve of the Holy Father in carrying his policy towards the Traditional liturgy into effect.

Posted by Joseph Shaw at 7:11 pm No comments:

Nuptial Mass at the Oratory 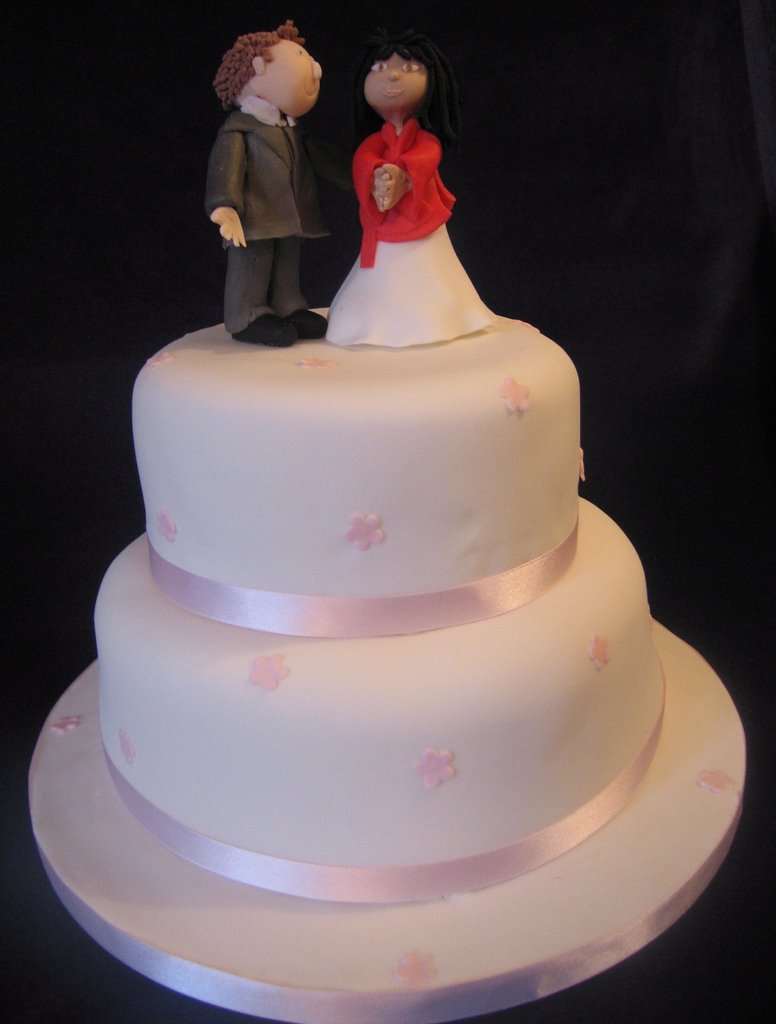 On the 21st December there was a splendid Traditional, Sung Nuptial Mass celebrated in the Oxford Oratory; the celebrant was Fr Richard Duffield. Please pray for the Happy Couple: their friends will recognise them from the cake! The cake was made by Lucy Shaw Cakes.

This rather grainy video was taken with an ordinary digital camera from the choir loft, and shows the consecration; note the newly married couple kneeling before the Altar. The time gap between the priest's actions and the sound of the bell is attributable to the distance from which the video was taken, not any slowness on the part of our servers!


As well as the very beautiful ceremony of the Vows and the Blessing of the Ring(s), the Traditional wedding service has special blessings of the bride and groom (actually, just the bride) which the celebrant makes after the Pater Noster.

Let us pray. Be gracious, O Lord, to our humble supplications: and graciously assist this Thine institution, which Thou hast established for the increase of mankind: that what is joined together by Thine authority, may be preserved by Thine aid. Through our Lord Jesus Christ, Thy Son, who liveth and reigneth with Thee...

O God, who by Thine own mighty power, didst make all things out of nothing: who, having set in order the beginnings of the world, didst appoint Woman to be an inseparable helpmeet to Man, made like unto God, so that Thou didst give to woman's body its beginnings in man's flesh, thereby teaching that what it pleased Thee to form from one substance, might never be lawfully separated: O God, who, by so excellent a mystery hast consecrated the union of man and wife, as to foreshadow in this nuptial bond the union of Christ with His Church: O God, by whom Woman is joined to Man, and the partnership, ordained from the beginning, is endowed with such blessing that it alone was not withdrawn either by the punishment of original sin, nor by the sentence of the flood: graciously look upon this Thy handmaid, who, about to be joined in wedlock, seeks Thy defense and protection. May it be to her a yoke of love and peace: faithful and chaste, may she be wedded in Christ, and let her ever be the imitator of holy women: let her be dear to her husband, like Rachel: wise, like Rebecca: long-lived and faithful like Sara. Let not the author of deceit work any of his evil deeds in her. May she continue, clinging to the faith and to the commandments. Bound in one union, let her shun all unlawful contact. Let her protect her weakness by the strength of discipline; let her be grave in behavior, respected for modesty, well-instructed in heavenly doctrine. Let her be fruitful in offspring; be approved and innocent; and come to the repose of the blessed and the kingdom of heaven. May they both see their children's children to the third and fourth generation, and may they reach the old age which they desire. Through the same Lord Jesus Christ, Thy Son, who liveth and reigneth...

And I say: Amen to that!

(Hat-tip to Fisheaters for this text; for the full text of the marriage service and Nuptial Mass, see here.) 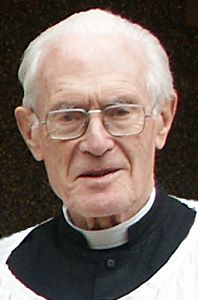 Fr Crowdy died on Friday 8th December at 3pm. Fr Boyle was with him. He wished to be buried at St Saviour's in Bristol. Requiescat in pace.

Please pray for Fr Crowdy, who said the Traditional Mass in Oxford for many years.

For his obituary, see here.
Posted by Joseph Shaw at 6:06 pm 1 comment: