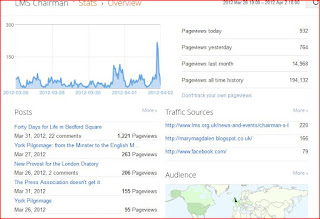 My blog post about the pro-life witness has attracted a lot of attention - much of it (judging by the comments) from pro-abortion activists. I have never had this much traffic in the history of the blog. This is, in fact, a very small-beer type of blog.

As I mentioned in the post on the witness, the huge crowd of pro-lifers was stimulated by the organisation of the counter-demonstration. One of the cunning ideas they came up with was to make donations on the basis of how many days the witness was there, so the longer 40DFL was there, the more money the pro-abortion cause would get. In point of fact, their whole hysterical response to a few people standing outside BPAS has been a bit like that, but to the advantage of the pro-life cause. They have created a buzz, a controversy, a sense of urgency, even of panic, which it would have been impossible for the pro-life movement to do on its own.

So: thank you, you lovely trolls, all you with made-up names and foul mouths. You are doing God's work too. And you have shown something of immense value: that we are doing something right. We've hit on a winning formula. And we're not going away.
Posted by Joseph Shaw at 6:26 pm