Update: thanks to all the pro-abortionists who are determined to spike my stats, and are so worried about the photos showing the relative numbers of pro- and anti-life groups in Bedford Square. In order to get round this it has been suggested that the photos were taken before 7pm, which was the official start time (actually, that was the time Bishop Hopes was arriving, the witness was there all day), in some sneaky ruse because we unfairly got there early. Anyway, if anyone wants to check the Exif data they can see for themselves that the earliest photo was taken at 7.10pm - the data is available on Flickr. Yes, that's right, I was a bit late - traffic is dreadful in London these days!


(Picture problem: seems to be restricted to Firefox.) The great thing about blogging is the possibility of instant rebuttal. I've been beaten to the punch by Lawrence England, but on the other hand I've got photos to show the falsity of the claim being made that the pro-lifers were outnumbered by the counter-demonstration. This was in fact the reverse of the reality. It's not easy to get good photos of large crowds, even though I had a wide-angle lens. But I walked all the way round both groups and there is no question about it. Our group was enormous: I'd guess 400-500. Their group was less than half the size. The counter-demo was a line of people facing one side of our group (behind a double set of barriers); our group was far larger both in length and depth. To help see what was going on here's a Google Street view picture: 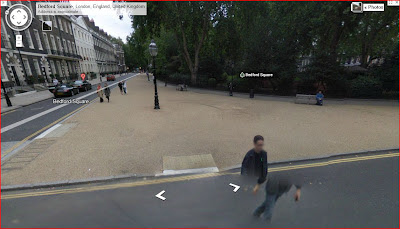 We were standing on the raised pavement closest to the camera; the counter-demo was beyond us. The street lamp (see second photo) and the park bench on the right (see first photo) were both well within our crowd. The counter-demo covered the much narrower band of pavement beyond this, and it wasn't very deep. You get get an idea how deep their group is from this photo I took from behind them. The street lamp in the photo below you can just see in the street view photo above, on the extreme left (you can't see the top). See that line of white posters people are holding up? That marks the front edge of the counter demo. That's where the heads of the 'pro-choice' crowd ends and the pro-lifers begin.

"Pro-choice protesters outnumber attendees at prayer vigil in Bedford Square"? I don't think so. No wonder the comment box on Fitzrovia News has been closed.

You've got to hand it to the 'pro choice' crowd, what they lack in numbers they are willing to make up in influential media friends and sheer noise. It was also very noticable that they had put the most photogenic, female members of their group in the front row, facing us, for the cameras. They shrieked and banged drums more or less continuously. They seemed to be particularly wound up when we knelt down, which happened frequently as we did the Stations of the Cross. The whole thing added up to quite a party atmosphere. It should be noted, however, that more than one member of the pro-abortion group had to be moved on by the police from attempting to intimidate members of our group, having walked round to the other side of the group in order to shout abuse.

Their main slogan was 'Stop harassing women' (which they pronouced in the American way, which was ironic as they also objected to 'American-style' tactics being used). Anything more clearly designed to harass and intimidate can scarcely be imagined than the noise they were making - and that was clearly the idea. We were praying quietly - inaudibly, in fact, for most of the time, in the context of the din from over the pavement. But their efforts were counter-productive: the promise of a big counter-demonstration was what produced the huge pro-life crowd. I don't think anything like this has been seen for years. It suddenly seems that the whole abortion issue is back in contention: the pro-abortionists clearly don't think they can just ignore us.

Bishop Hopes got the support he deserved on the day, and good for him for standing up to the intimidation directed at him personally, in advance, to stop him going. Episcopal leadership makes a huge difference to everything in the Church; the pro-life cause is a case in point. This point was certainly not lost on the pro-abortionists. Here is Bishop Hopes at the last Latin Mass Society Annual Requiem (last November), which he celebrated for us in Westminster Cathedral. (He is changing from a chasuble to a cope in order to preach at the end of Mass.)

More photos of the witness.
Posted by Joseph Shaw at 11:42 am