The Press Association doesn't get it

Oh for the days of Lord Copper and the Daily Beast when you could just make things up and stick them in your paper, and everyone would believe you, or at least think it was as likely as the polemic coming from the other side. Those days, alas, are gone.

Reporting on the 40 Days for Life prayer witness last night and the counter-demonstration by pro-abortionists, the Press Association wants us to think this:


A small number of minor scuffles broke out between the opposing sides who were then separated by police. One man taunted pro-abortionists by removing his clothes to reveal a crucifix shaved on to his chest.

The pro-choice leaning people at Demotix, however, weren't in on the scam and innocently put up this: 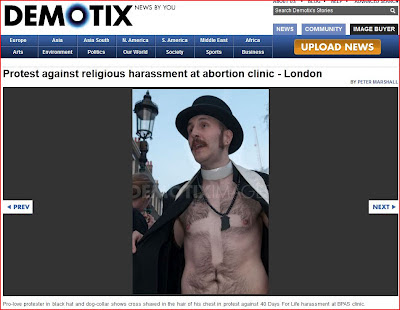 Double click for a larger image (so you can read the caption).

Ok, so maybe the PA's fearless reporters just got confused. Funny how all the confusion in the article has the effect of presenting the pro-lifers as aggressive, isn't it? But they could have checked.

H-t the Reluctant Sinner.
Posted by Joseph Shaw at 6:45 pm