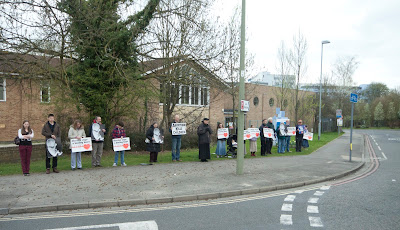 Yep small fry, and I don't think our pictures will appear in the Guardian, but this has been going for years. The third Saturday of the month, from 3 to 4pm. I haven't been able to join it for ages, but I was there today. While Fr John Saward leads the Rosary by the entrance to the John Radcliffe Hospital (the only place in Oxford where abortions are carried out), there is exposition in the church, St Anthony of Padua in Headley Way, behind us. 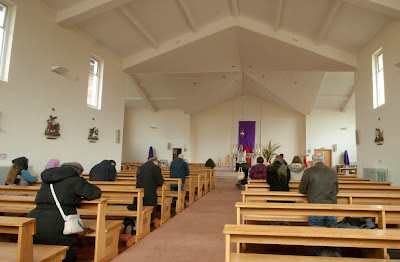 I don't think 40 Days for Life is officially Catholic, but their witness in Belgrave Square was pretty Catholic. I think this is the future of the pro-life movement - not the whole of its future, but an important part of it. We can be supported by the Muslims and Evangelicals (one Muslim gave us the thumbs up today as he passed), but we need to use prayer, and the Eucharist.

Abortion is a issue of Natural Law, of universal justice. It is not a religious issue. But it will not be defeated without the use of supernatural means. Infanticide and gladiatorial shows in the ancient world didn't end until Christians stopped them, not because they aren't against universal moral principles everyone can recognise, but because only Christians had the motivation, the charity, the grace, to do something about them. If we deliberately fail to use the supernatural means of defeating evil, then don't be surprised if we fail to defeat it.
Posted by Joseph Shaw at 6:00 am