The Problem of Chivalry: Theseus and Hippolita 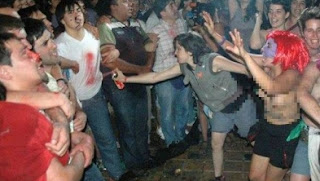 As I noted in my last post, a good number of people who regard themselves as upholding traditional, civilised values, have come to regard the cringing and self-hating subserviance of men demanded by many feminists as actually a moral imperative, under the title of 'chivalry'. There was an excellent example last October from Argentina, when a huge mob of angry feminists attacked the Catholic Cathedral in the city of Mar de Plata. (They were angry with the Church as a whole for opposing abortion and the like.) The videos and photographs of this event were truly horrifying. The cathedral was defended by a chain of young men, using the technique of passive resistance. These men were verbally and sexually abused, sprayed with paint, punched and kicked. But the line didn't break, and the feminists weren't able to get into the Cathedral itself to desecrate it.

These young men were heroic; passive resistance can be a good technique, and in the circumstances I am sure it was the best approach. The point of this story for my purposes is the contrasting and craven attitude of the police. This is an annual event; they knew what was coming. Why did the police not intervene?

The police who were present reportedly told the media that they were unable to intervene because “they are women.”

Right, so let's talk about Hippolyta. She was the Queen of the Amazons, and she was defeated by Theseus, Duke of Athens, in battle: this is the dramatic setting of Chaucer's story of chivalry, the Knight's Tale, the tale told by the verray parfit gentil knight, the paragon of chivalry, that everyone remembers from The Canterbury Tales. Theseus' triumph plays no direct part in the story, but forms a sort of preface to it. It does the same in Shakespeare's play which is based on Knight's Tale, Two Noble Kinsmen. Shakespeare was so taken by this idea, however, that it plays the same role, of backdrop or preface, in another play, A Midsummer Night's Dream, a story without any other very obvious connection with the plot of Two Noble Kinsmen. There is more: the story of Theseus' triumph over Hippolyta is then re-enacted in the Dream, in the parallel story of the fairy King Oberon and his Queen, Titania. 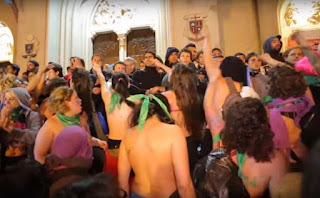 So this is important, right? And what is it? Hippolyta / Titania represents out-of-control femininity. This is defeated, but not simply crushed. To be really defeated, it must be brought into harmony: it must be brought into a mystical marriage with the masculine principle. Theseus marries Hippolyta; Oberon is reconciled with his queen, Titania. While the conflict lasts, the whole cosmos is thrown into chaos and groans: the seasons are disrupted, the crops fail. When the conflict is resolved, all is well again.

Shakespeare is too clever a writer to present this in a crass way. Titania's resistence to Oberon is not completely unreasonable. Nor is her reconciliation with him a matter of giving up her power. Oberon is unable to keep the show on the road by himself; hence the cosmic catastrophe of their quarrel. But it is necessary that things are resolved in his favour. Titania must give way to him, in the end.

This all makes A Midsummer Night's Dream a truly subversive play: not against the values of the time of its composition, to be sure, but against those of today. Shakespeare had plenty to say about out-of-control masculinity, and this continues to be a major theme of popular and high culture today. The possibility of dealing with out-of-control femininity, by contrast, has become almost a taboo subject. 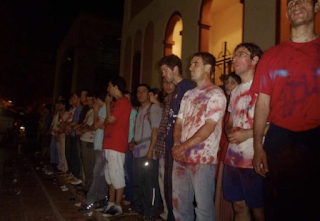 Shakespeare's lesson is one which needs to be leant by Bishop Olmstead's target audience: perhaps he should suggest they go and watch the play. In order to be 'leaders', in order to 'man up' and 'take responsibility', men - priests and fathers especially - need to be prepared to face and deal with unjust and aggressive women, as well as unjust and aggressive men, and not accept the distorted interpretation of chivalry as giving way to oppression instead of opposing it, if the oppression happens to be female.

But this is made very difficult by a society which teaches that male self-assertion is wrong, and this secular dogma is something we, in the Church, have to un-teach our young men. At least some of the dragons you have to fight, boys, are female.

Labels: Masculinity and the Church, Shakespeare