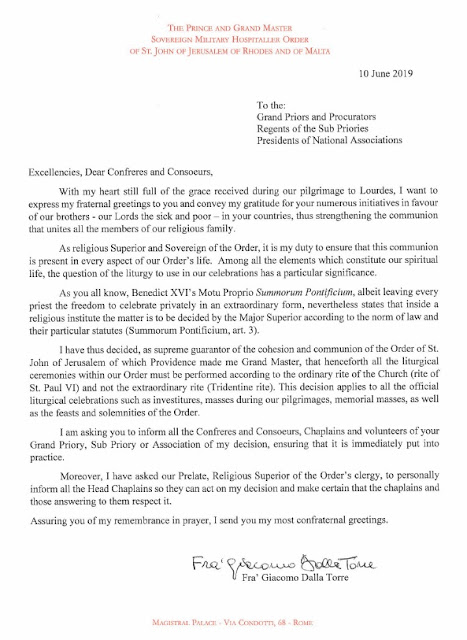 Art. 3. If communities of Institutes of Consecrated Life and Societies of Apostolic Life, whether of pontifical or diocesan right, wish to celebrate the conventual or community Mass in their own oratories according to the 1962 edition of the Roman Missal, they are permitted to do so. If an individual community or an entire Institute or Society wishes to have such celebrations frequently, habitually or permanently, the matter is to be decided by the Major Superiors according to the norm of law and their particular laws and statutes.
So, no, it doesn't say that in order to have celebration of the EF in the context of religious communities the permission of the Superior is necessary.

Heigh ho. Since Chaplains of the Order, unlike members of clerical orders like the Dominicans or Jesuits, celebrate most of their Masses outside the context of the Order, and celebrate for the Order really at the Order's request, the situation is rather unique. It becomes a question not so much of priests having the right to celebrate the EF, as of lay (including religious) members of the Order having the right to request it. The Grand Master doesn't seem to anticipate this possibility, but he can't take away their right to do so under Summorum Pontificum Article 5, by analogy with the situation of parishes. But who wants to go into battle with the Grand Master? And how much sympathy would they get, if they can access the EF down the road?

I know that the Traditional Mass means a great deal to many members of the Order, and to many of the Order's Chaplains. This letter is going to make an important difference to the character of the Order.

Support the Latin Mass Society
Posted by Joseph Shaw at 10:14 am