'The Nation that Forgot God' 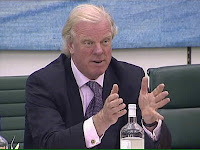 After attending the Kent Day of Recollection yesterday I drove to the House of Commons for the launch of 'The Nation that Forgot God', a collection of essays about secularisation. It is edited by Edward Leigh MP and Alex Haydon; Mr Leigh hosted the launch in his Commons office.

Edward Leigh (pictured) is a Catholic MP in more than name only. He is a founder of the Cornerstone Group, a 40-strong group of Conservative MPs who beleive in the 'spiritual values which have informed British institutions, our culture and our nation’s sense of identity for centuries, underpinned by the belief in a strong nation state'. He is also active in the pro-life cause.
The list of contributors to the book is extremely impressive, including my own ordinary, Archbishop Nichols of Birmingham, who has spoken out frequently in defence of the Church against the Government's attacks, notably on the Sexual Orientation Act; Roger Scruton, now a Fellow of Blackfriars, the Dominican Hall in Oxford University; Dom Aidan Bellinger, Abbot of Downside, and the Anglican Bishop Nazir-Ali, who caused a storm by suggesting that the Anglican Church should be making an effort to convert Muslims living in the UK to Christianity. 'Perish the thought' seemed to be the reply of the Anglican establishment.

The launch was attended by Abbot Bellenger and a number of politicians, including Iain Duncan-Smith.

The book is published by the Social Affairs Unit and costs £10; I look forward to reading it. A very interesting article in the Daily Telegraph quotes Archbishop Nichols as follows:

"Our politicians seem to live in a different world, a world that is purely secular and material, a world that does not permit a mature consideration of the key role of religious belief. "Behind this is the assertion that religious influences are bad for you, and that ignorance of religion is better than exposure to it and the study of it.
"Why is this so? It lies in the distorted and truncated notion of reason which shapes our society and, to a large extent, the education it offers. "Quite simply we have sold our soul to a positivistic understanding of reason. By this is meant that knowledge and reasoning are limited to what can be positively seen, measured and physically tested through hypothesis, experiment and observation.
"What positive knowledge and reasoning cannot do is provide anything that is normative in value or moral judgement. They can discover, magnificently, what can be done. They cannot, properly, provide and answer to the question, 'But should it be done?'
"Moral reasoning overcomes the.. 'individualism' of a positivist culture.
"A society which limits itself - and its education - to a positivistic understanding of reason will find itself unable to determine shared moral principles and values. Such a society will lack cohesion."

I think this is an extremely helpful way of articulating the problem: that what we are facing is not just a different way of life, but a different conception of rationality. To argue with a rival theory of rationality is certainly possible, but one must be on one's guard when one's opponents appeal to 'rationality' as the final arbiter. I have myself touched on this aspect of the problem of secularisation here.