Following my exchange of letters with Bernard Tiley in The Catholic Herald, Mr Tiley wrote again - and again I have responded. My letter is in the current edition.

Mr Tiley's letter from last week merely reiterates what he said before, at greater length. The most salient point in his letter, however, is his repeated insistence that he can't understand what I'm saying. His words are in blue, my comments in red.

What is baffling in Dr Shaw's letter is that my view is a 'remarkable example of the "blame the victim syndrome"'. I don't blame anyone, and I don't understand how a person who chooses to lapse from the faith becomes some sort of victim. ...

Saying that lapsees are not 'serious' and have wrongly placed personal preferences above participation in the Eucharist sounds like blame to me. But the last admission is simply astonishing. Misguided, certainly, sinful, obviously, but surely we can have compassion for the lost sheep, the man who fell among thieves, the prodigal - didn't Our Lord say something about this?

I am equally baffled by Dr Shaw's question, "Is Mr Tiley seriously suggesting that the Church's job is to make it as hard as possible to get to heaven, so only those who really deserve it will make the grade?" The short answer is no. It beggars belief that Dr Shaw can read such nonsense into what I said in my letter. I made no reference to salvation or heaven except to say, when referring to Holy Communion, that in John's Gospel we have Jesus' promise that "when we eat his flesh and drink his blood we will have eternal life." [sic] ...

Well yes, the Blessed Sacrament is the Bread of Wayfarers, which sustains the Christian life through the difficulties presented by the World. Lapsing means missing out on this - and on Confession, and probably Extremen Unction. Salvation becomes harder if you abandon the Sacraments - let us put it no more strongly than that. Making it harder to continue to practice the Faith, by imposing liturgical hurdles on the faithful, ipso facto makes it harder for them to get to heaven.

I do not think it right, for example, to try and "sell" the Tridentine liturgy by denigrating the Novus Ordo. Also, I do not think there is anything to be gained by continuing this dialogue, so I suggest that Dr Shaw and I agree to differ, and I wish him well.

I wish Mr Tiley well too, come to that, but I haven't 'denigrated the Novus Ordo' in this correspondance, and I wouldn't see that as the best - or any - way to 'sell' the Traditional Mass, if I were in the 'Mass selling' business, whatever that might be. It is presumably legitimate to promote particular devotions; this happens a good deal in the Catholic Church, and this is what the Latin Mass Society, like many Catholic organisations, is engaged in.

However I replied as follows - the letter has been published in the current edition.

Mr Tiley (Letters, 27th August) reiterates his criticism of my observation that poor liturgy has been a factor in the lapsation of many people growing up after the Second Vatican Council. Since he remains ‘baffled’, I will attempt to clarify the situation.

For people of this generation – my own – there is seldom any question of ‘liturgical preferences’. We experienced a fairly narrow range of variations on the Mass of Paul VI, larded with liturgical abuses. The ones who lapse are not liturgical experts; they are victims – a word Mr Tiley professes not to understand – of a liturgy (and catechesis) which fails to present to them the fullness of the Faith.

To summarise: ‘In some places the perpetration of liturgical abuses has become almost habitual’. Abuses ‘contribute to the obscuring of the Catholic faith and doctrine concerning this wonderful sacrament’. ‘[T]hey also hinder the faithful from “re-living in a certain way the experience of the two disciples of Emmaus: “and their eyes were opened, and they recognised him””’. (Redemptoris Sacramentum (2004) 4-6.) [The internal quotation is from John-Paul II's encylcical Ecclesia de Eucharistica.]

In this context the Traditional Mass has an important role. The Holy Fa 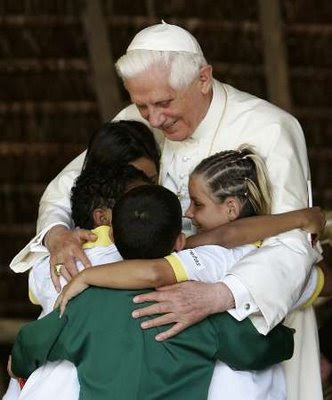 ther refers to ‘the sacrality which attracts many people to the former usage’ (Letter Accompanying Summorum Pontificum), and professes the hope that this will influence the way the Mass of Paul VI is said. So the Traditional Mass is particularly good at manifesting the divine realities obscured by the liturgical abuses condemned in Redemptoris Sacramentum; this is why the Holy Father tells us in the same document that ‘it has clearly been demonstrated that young persons too have discovered this liturgical form, felt its attraction and found in it a form of encounter with the Mystery of the Most Holy Eucharist, particularly suited to them.’

There are three other letters on the same subject in the same edition. Mr Aiden Kirkpatrick makes the point that even people defined by Mr Tiley as lacking 'seriousness' for lapsing as a result of the liturgical revolution deserve our help: 'The weak must be saved as well as the theologically strong'. Mr Anthony Dowling lambasts liturgical abuses which have the result that the Lord 'has been eclipsed by the personality of the priest', and identifies this as a cause of lapsation. Mr Tom McIntyre suggests that liturgical abuses are possible in the Traditional Mass - obviously true, though no one seems to be arguing that these caused lapsations. He then goes on to misquote Summorum Pontificum in order to claim that only geriatrics have the right to ask for the Traditional Mass. We shall see if the Letters Editor has had enough of this correspondance...
Posted by Joseph Shaw at 2:12 pm

Labels: Liberal critics of the EF, The Press