Photos from the Walsingham Pilgrimage

Early on Friday morning last week, about 60 pilgrims set out from Ely to walk about 60 miles to Walsingham. Our intention was the conversion of England, and the means we were employing to bring this about were principally prayer and penance. We didn't go by bus. We walked, because it is more difficult to walk. We wanted to do it the hard way. 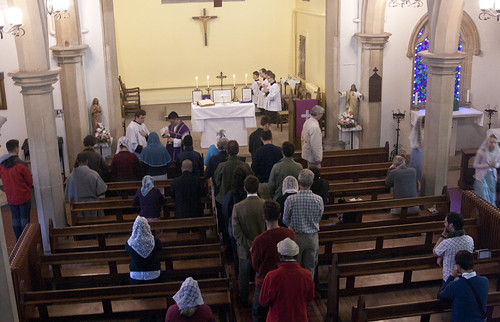 We had the Votive Mass for Pilgrims before we left Ely, in St Ethelreda's Church. It was a Sung Mass with chant: we had with us an excellent chant schola, led by Gwilym Evans, a seminarian of the FSSP. 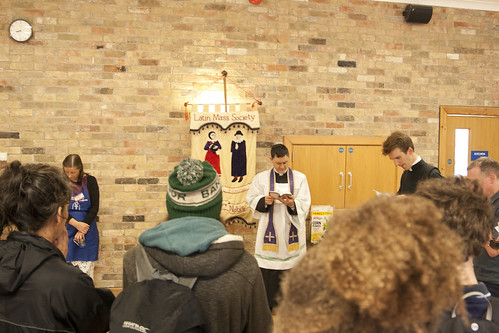 The Pilgrims' Blessing (from the Roman Ritual) was given by one of our chaplains, Fr Michael Rowe from Perth, Australia. Our other chaplain was Fr James Mawdsley FSSP. 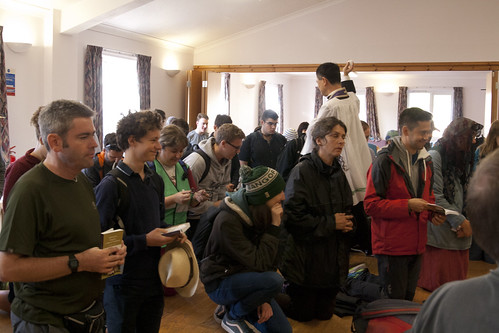 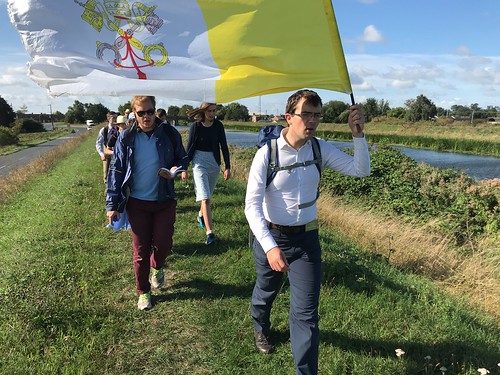 The first section of our walk was by the Great Ouse. We sing and pray as we walk, when conditions permit: the Rosary, Litanies, vernacular hymns and a number of chants. We also have some secular songs to maintain our spirits when we get tired. 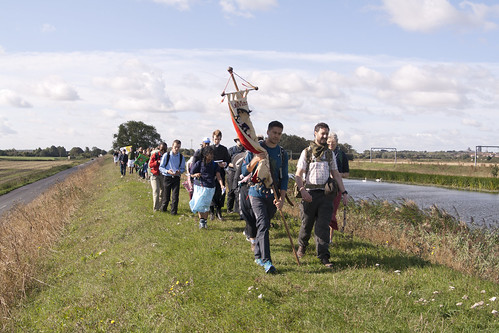 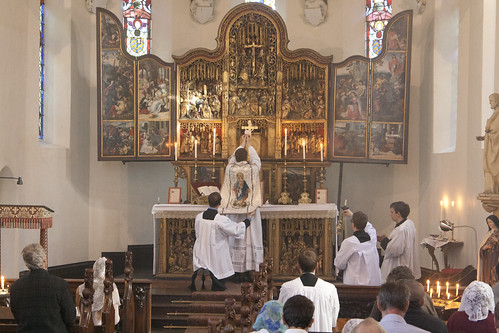 On the second morning we have Mass in the chapel of Oxburgh Hall, a recusant Catholic house with a priest-hole, where the Faith was kept alive in times even worse, in some ways, than today. 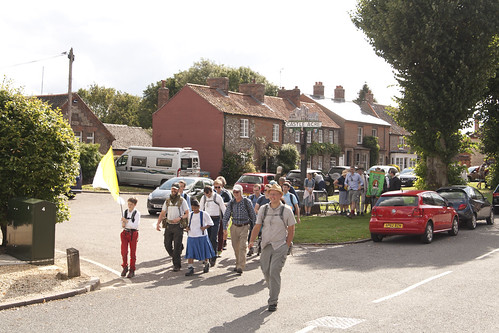 Leaving one of our rest-stops on day 2, Castle Acre. 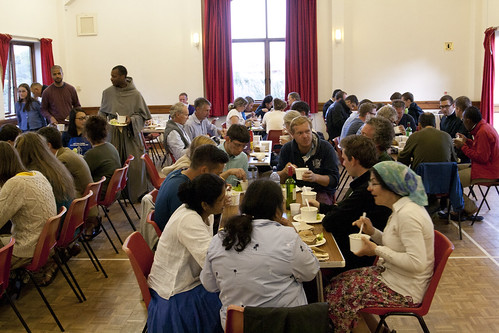 Dinner on the second day, in Rudham District Hall. 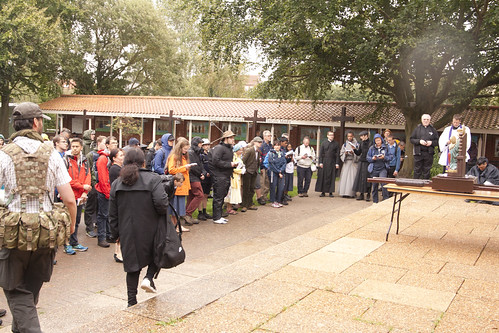 We arrived finally in the Catholic Shrine, having been joined by a group of Americans on the Regina Magazine tour (carefully planned in advance!). 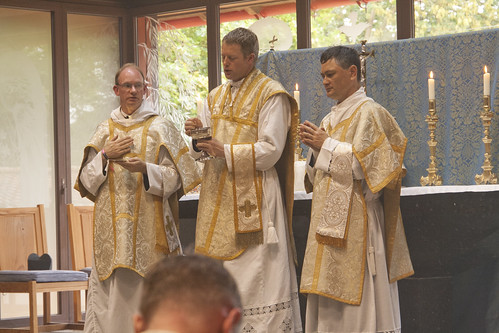 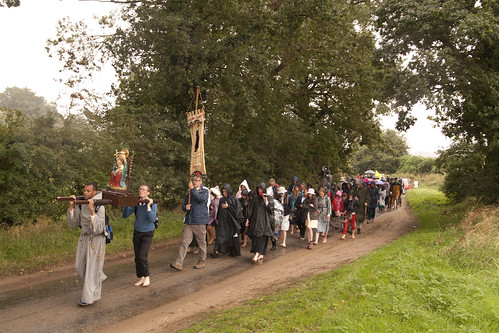 After Mass we walk in procession to the site of the Medieval shrine, of which, sadly not a trace remains, other than the gable end of what was once Walsingham Priory. The walking pilgrims' numbers are now doubled by pilgrims there for the day, or people in Walsingham for the Youth 2000 weekend.

It started raining a little on the last leg of our walk, but more seriously during Mass. Our Holy Mile was pretty wet. After processing through the Priory ruins we set our procession statue down where the Holy House once stood, and while singing the Te Deum and other things we all venerated her. 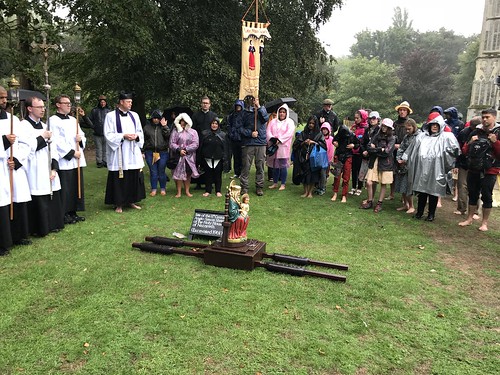 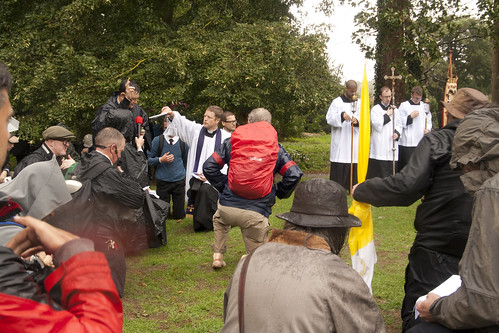 We received a the blessing of returning pilgrims (also from the Roman Ritual) from Fr Rowe. 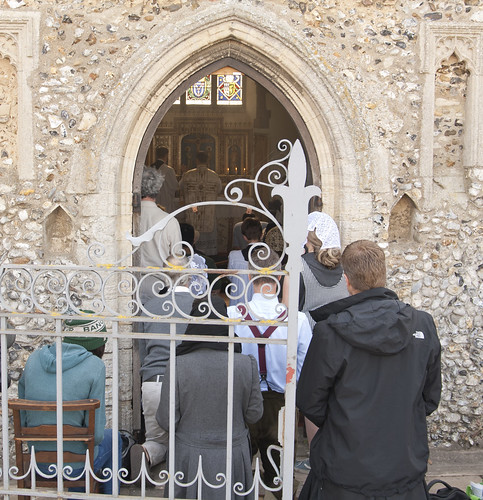 The next day, those who had spent the night in the area came to Mass in the Slipper Chapel. This is part of the Catholic Shrine complex; it is a medieval chapel which marked the start of the Holy Mile. It is tiny, and we always spill out through the doors. Luckily the weather was better! 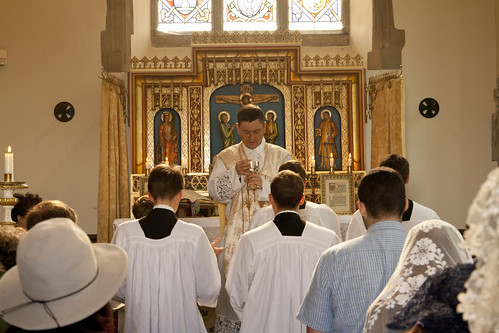 The pilgrimage this year was tougher than usual physically, as we had to move our night stops because one was not available. This meant we had a few more miles to walk on Friday and Saturday. Luckily the hot weather had passed, and it was fairly cool: even cold, at night. Our spirits were not dampened, however, and thanks to the heroic assistance of our support team - drivers and cooks - the walking pilgrims won through.

Support the work of the LMS by becoming an 'Anniversary Supporter'.
Posted by Joseph Shaw at 10:32 am