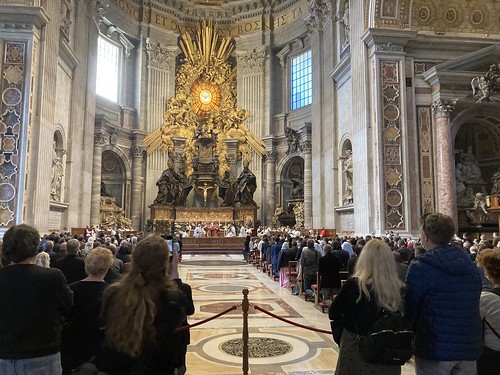 There are already some and will be more better photographs, but this gives more of an indication than most of the numbers attending the Mass in St Peter's Basilica organised as part of the Summorum Pontificum Pilgrimage, 'ad Petri Sedem'. There were I think well over 500 people, spilling out of the roped-off area of the Chapel of the Throne, more than last time, in 2019, despite continuing COVID travel restrictions. 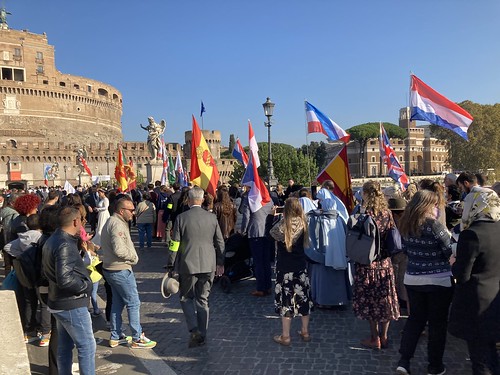 Similarly, the usual Vespers in S. Maria ad Martyres, the Pantheon, on Friday evening, and the closing Mass in Sta Trinita on Sunday, were well attended. In the latter case it would have been difficult to get any more people into the Church, despite the fact that there is now an alternative Vetus Ordo High Mass in central Rome, with the Institute of Christ the King Sovereign Priest, for whom it was a patronal feast-day. Their church, St Celsus, was in fact unable to accommodate all the faithful who came to the Benediction before our procession to St Peter's. 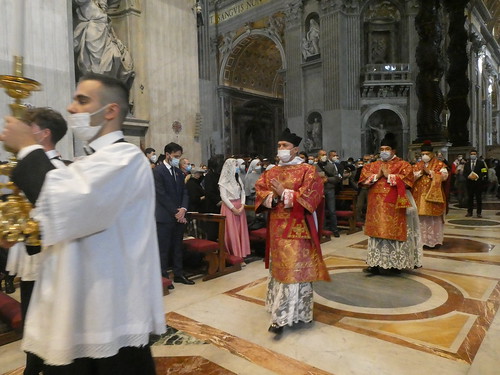 So I say, thank you, Holy Father! Nothing happens in Rome without his knowledge and approval: it is, after all, his diocese, and these are his churches. The general sense I had from my meetings in Rome was that life would go on for the Traditional Mass after Traditionis Custodes. As Pope Francis said two months ago:

If you read the letter well and read the Decree well, you will see that it is simply a constructive reordering, with pastoral care and avoiding an excess ...