Yesterday I gave a talk to St Paul's School, one of England's most presigious schools, particularly noted for its outstanding academic record. It was founded by the great Humanist Dean Colet in 1509 and has a large statue of him by the entrance. This year is therefore its quinquegesimal year, which puts the school into the odd category of ancient public schools founded as Catholic institutions. 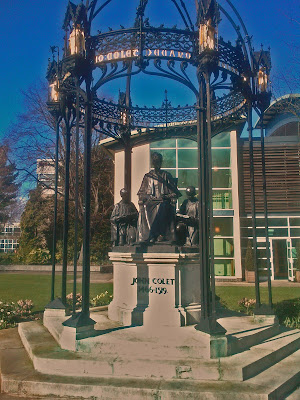 I spoke about Faith and Reason in the Middle Ages, flying a small flag for Oxford University and my own Hall, St Benet's, and also for Philosophy and Medieval and Catholic Philosophy.

I give talks like this to schools pretty regularly. Over the last couple of years I have been to the London Oratory School, Cardinal Vaughan, and St James's School for Boys.
Posted by Joseph Shaw at 5:27 pm