A note on Freemasonry 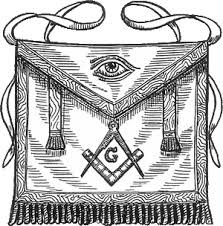 Since Freemasonry is regarded as significant by Pope Francis, as well as many previous popes and in various private revelations by the Blessed Virgin Mary, I thought I'd try to educate myself a little about it. I can't say I've come to any very exciting conclusions, but I can recommend a couple of books, and make a few observations.

My interest has been in the philosophy (or religion, or ideology) of Freemasonry, as opposed to the extent it has, or fails to have, influence in local or world events. The second subject is one where reliable information is obviously going to pretty difficult to find, and I think that Freemasonic influence over the Church, specifically, is going to be of importance only if it is connected with a philosophy which is opposed to the Church's teaching. Many dubious people have had undue influence over the Church locally, or in Rome, over the centuries, but if what they are after is money or prestige then the damage they do to the Church, while real, is at least comprehensible and repairable. The ultimate threat to the Church, against which Christ has given his ultimate guarantee, is not prelatial nephews spending the revenues of dioceses they never visit on wine, women and song, or criminal gangs arranging flamboyant funerals for deceased mobsters, disedifying though these are, but the Church ceasing to proclaim the Gospel because of the influence of an alien ideology.

So here are a couple of books. The classic study of British Freemasonry is Darkness Visible by Walton Hannah, first published in 1952. An excellent recent account is Masonry Unmasked by John Salza (2006), from an American perspective. The aim of each of these books is the same: to demonstrate, from the rituals used by Freemasons, that it has philosophical and religious claims which are incompatible with orthodox Christianity.

Hannah wrote his book as an Anglican cleric, at a time when several Anglican bishops were masons. They managed to prevent any official investigation or discussion of the subject, but the book's exposure of the issues brought a gradual end to the era of such close entanglement between Masonry and the Established Church. Nevertheless, Hannah later became a Catholic and a priest. Salza was a Catholic who became a mason after being told that there was nothing much wrong with it, for a Catholic; he found out more, as a mason, and realised that there was, and left it. Freemasonry is a religious system incompatible with Christianity; if most masons don't take this system very seriously, there is even less reason to commit oneself to it formally. As Hannah points out, the make-believe quality of the oaths and rituals, if that is going to be the defence, only serves to emphasise that in taking them one is guilty of the sin of rash swearing. But as a matter of fact there are masonic writers whose mystical interpretations of the rituals are the same of writers like Hannah and Salza.

The Masonic religio-philosophical system is, in a nutshell, that all religions are equally valid: members can swear their oaths on any holy text they like. Historically, the inspiration for the moral ideas and rituals comes from Christianity, with a bit of made-up ancient Egyptian mysticism. But Freemasonry also claims to have 'secrets' and a method of instruction which makes its members into an enlightened elite.

In this, Freemasonry is a fully-worked out example of Enlightenment liberalism, plus rituals, role-playing amateur dramatics, and silly handshakes. Liberals looks down at the world's religions and say, first, that they are all equally valid, and then, in the next breath, that they themselves have transcended such footling divisions. To say all religions are equally true is, of course, equivalent to saying that all are equally false, and it is not so surprising to find that the great division in the world of Freemasonry is between officially theistic masonry - the 'Grand Lodge' Masonry of the English-speaking world - and non-theistic and in practice anti-clerical masonry - the 'Grand Orient' Masonry of the Continent. The split occurred at the beginning of the 19th century, when the Grand Orient lodges rejected belief in God as an essential qualification for masons.

It is sometimes said by British masons that Catholic condemnations of Freemasonry refer to anti-clerical and historically anti-ancien regime Grand Orient masonry, not the kind which can happily include among its members British Kings and an Archbishop of Canterbury. However, as Hannah points out, this is not so, since many such condemnations date from before the split, and even later ones note religious indifferentism as a major issue, a criticism which ceases to be applicable when you tip over the edge into atheism. In fact the condemnations apply to both kinds, and to their many splinter-groups. It is enough to point out that they deny the unique significance of the Christian revelation, engage in unjust or at best rash swearing, and, despite official denials, seek to establish obligations which supersede those of Church and State.

Hannah gives a nice illustration of this. When looking into Freemasonry, he wrote, as an Anglican in orders, to bishops who were known to be masons, asking them for guidance as to how he should address the concerns of members of his flock about Freemasonry. They replied that they were not at liberty to discuss the matter. In other words, their masonic obligations took precedence over their episcopal obligation to provide guidance to those under their charge. This is the more remarkable in that the typical response of Anglican clerical masons to criticisms was to play down the reality of masonic obligations and the importance of the 'secrets': which had, after all, been published by masonic publishers, in easily decipherable code, for many years, accompanied by numerous exposés even before Hannah's supremely systematic and accurate one.

The situation is richly absurd, in that everyone can pore over masonic rituals, read masonic interpretations of them, and have a public debate on the subject, except the masons themselves, who, in Hannah's day and (I get the impression) today also, remain on the sidelines bleating feebly that it is all harmless fun but they can't go into details.

The question then is: when (for example) Our Lady of Good Success in Quito warns of the influence of masons, when Popes up to and including Pope Francis warn about 'Masonic lobbies', what exactly are we being warned against? It might seem unfair to point the finger at a dwindling British band of rather conservative, establishment types, who may give each other preferential treatment in dubious ways but hardly seem a threat to world peace. But actually, I think the fact that Anglicanism was riddled with Freemasonry at the eve of the great cultural and moral crisis of the 20th century does help explain why it collapsed so quickly and so completely: it didn't really believe in itself. Again, the fact that significant numbers of establishment types are still consoling themselves with 18th century allegorical morality tales of supreme superficiality, instead of either doing anything about public culture or availing themselves of the graces available from Our Lord and Saviour, helps explain why the 'small-c' conservative response to the continuing decay of this country is so consistently flaccid.

So I think the poison of religious indifferentism is at least part of what is being warned against. Today we see religious indifferentism raised to the level of a sort of official religion, in schools and in government, both local and central. One may say that Freemasonry has triumphed, even if as an institution it has seen better days. If indifferentism, or indifferentism which has evolved into practical atheism, is a motive force for organised campaigning groups, whether these groups be derived from formal Freemasonry or not, one may, again, say that the spirit of Freemasonry is active in them. And indeed such groups exist within the Church, and it makes little difference whether they identify with Freemasonry or not: what matters is what they believe, and the effect they are having.

It is obvious that you can't proclaim the Gospel unless you believe in it. If you think that the Gospel is no better than any other religion, and that you and your enlightened friends can look at all these belief systems from a great, patronising height, then you don't believe in the Gospel. To that extent that this attitude permeates the Church, the Freemasons have won.

Maybe it is actual, professed masons doing the bad things in the Church; if so, we'll probably never know. What we do know is how to oppose the errors of their ideology: with the truth of the Gospel.

Support the work of the LMS by becoming an 'Anniversary Supporter'.
Posted by Joseph Shaw at 1:23 pm