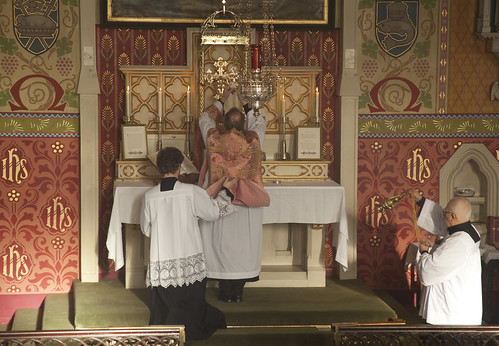 The Catholic Truth Society boasts that the translation they include in their booklet of the Ordinary of the Mass is a newly commissioned one. This is a good thing, for many translations in old hand missals are not very good - surprisingly enough, from the era when a good number of Catholics would have had the Latin to notice errors and infelicities, at least so one would imagine.

I think it would be a good thing if Catholics could get into serious discussions about the meaning of Latin words, so I am going to do a little digging. The CTS translation is not too dreadful, but - obviously - the LMS one is far superior. (Buy it from the LMS website.)

There are certain words and passages which can serve as a litmus test of liturgical translations. Does it translate 'hostia' as 'host', or 'sacrifice', or correctly, as 'victim'? Does it refer to Abraham as a Father or Patriarch, as the Latin does, or find some mealy-mouthed substitute? Does it cut out the poetic adjectives which adorn the Institution Narrative: accipiens et hunc praeclarem calicem in sanctas ac venerabiles manus suas?

It is at a slightly more subtle level that the CTS translation is deficient: and I am afraid the deficiency is a real one. It is evident to me, not a great Latinist by any means, but, like many Catholics, someone who can look from the Latin page to the English one and see what is being translated, that the translation is just consistently, well, a bit lame.

How do you translate that amazing word, tabernaculum? It was 'tabernacles' which St Peter proposed to build on the mountain of the transfiguration, and translators have rendered it as 'booths' and 'tents', but clearly this is a word freighted with significance. It is tabernacles which feature in the Feast of Tabernacles: 'Feast of Tents' hardly captures the idea. And the word and the concept have been adopted for the dwelling of Our Lord in the Blessed Sacrament in our churches. It appears in the Psalm Judica: 'unto thy Holy Mountain and unto thy Tabernacles'.  The CTS gives 'tents'. Lame. The LMS has 'tabernacles'.

What of the Canon? Prayer for the living: pro se suisque omnibus: literally, 'for them and for all their own', the LMS conveys the sense with 'for themselves and all who are dear to them'; the CTS has 'for themselves, for their families and friends'. As well as suggesting that the Latin says things it simply does not say, don't you think this lacks dignity? It is lame.

What of the 'locum refrigerii', which we pray for, for the dead? The LMS captures the idea, born in hot countries no doubt, of the cool and quiet of heaven, with 'place of refreshment'. The CTS has 'a place of respite.' Seriously lame.

How about 'Hanc igitur oblationem'? The LMS gives us 'this oblation'; the CTS 'this offering'. Now that is really lame. An oblation is more than just an offering. It always reminds of me of Martin Luther saying that the Canon 'stinks of oblation'. Well, the CTS version doesn't: at least, not so powerfully.

It ought to smell to high heaven: like at the Offertory, where the CTS tells us that it should 'rise up with a pleasing fragrance before your divine majesty'. But the LMS has 'ascend in the sight of thy divine majesty with an odour of sweetness.' Who could not prefer the LMS version, especially when it is evident that it is closer to the Latin? The CTS just gives up the unequal struggle to find a translation of 'in conspectu divinae maiestatis tuae.'

The fact is that the Latin is flowery. If you don't like it, find some other religion: these are among the most ancient liturgical texts which exist in the Church. It is flowery, repetitive, poetic, and larded with foreign, exotic, and archaic vocabulary (by the standards of its own day). It needs to be translated in a way which is faithful to these realities. That is why the LMS has used 'thee' and 'thou', which the CTS has not had the courage to embrace, which are rather less archaic to us than 'quaesumus' was to Romans in the 4th century.

Translating is difficult, and I don't want to be too harsh on the anonymous translator who struggled over these texts for the CTS. I am sure he was poorly paid. But readers of this blog can do better. They can buy themselves the LMS booklet.  It can be purchased from the LMS website.