In World War II, Malta was described as the 'unsinkable aircraft carrier'. Well, it has sunk now. The Bishops  of Malta (both of them) have stated that anyone in an irregular union who feels 'at peace with God' should not be excluded from Holy Communion or from Sacramental Absolution: at least, that's what they seem to say. Readers can judge for themselves.

If, as a result of the process of discernment, undertaken with “humility, discretion and love for the Church and her teaching, in a sincere search for God’s will and a desire to make a more perfect response to it” (AL 300), a separated or divorced person who is living in a new relationship manages, with an informed and enlightened conscience, to acknowledge and believe that he or she are at peace with God, he or she cannot be precluded from participating in the sacraments of Reconciliation and the Eucharist (see AL, notes 336 and 351).

there are complex situations where the choice of living “as brothers and sisters” becomes humanly impossible and give rise to greater harm (see AL, note 329).


I wonder what would happen of a priest decided that an adulterer had not undertaken a process of discernment with the requisite humility? If he'd had humility, but not 'love for the Church'? Or maybe that his 'search for God's will' was not, as required, 'sincere'? Would Archbishop Scicluna congratulate such a priest for his pastoral sensitivity?

If such a scene appears implausible, then we must admit that what the bishops are saying is simply: give absolution and Holy Communion to anyone who asks. Will we have a new Rite of Confession which makes the Act of Contrition optional? Or maybe a new Act of Contrition that leaves out the Contrition? It might look like this:

'O my God, because thou art so good, I am not at all sorry that I have offended thee, and with the help of thy grace I will offend thee again and again.'

To which the priest will respond:

'Go in peace, even though God has not put away your sins.'

Because, remember, this is not about people ignorant of the law, or about people whose actions are no longer moral actions at all because of an intolerable pressure which has destroyed their agency - not at all! - these are well-informed Catholics capable of sincere 'discernment' who are in happy second civil marriages which are sustaining loving homes for the children of these unions.

The only thing worse than the content of this document is the fact that it was published in the Vatican's official newspaper, L' Osservatore Romano.

The people telling the Four Cardinals that their dubia have already been answered now have another document to point to. But of course this is not an act of the Papal Magisterium, and in any case what we need to hear is how we are supposed to square this with things like the Council of Trent's infallible teaching that it is not impossible to obey God's law when in a state of grace. Austen Ivereigh and the others need to tell us, and the wretched clergy of Malta, why respect for the Magisterium places an ambiguous footnote in an Apostolic Exhortation, as interpreted by a couple of bishops, over a solemn anathema of a General Council.

The Magisterium of nods and winks is becoming more emphatic, and the crisis deepens, with more and more bishops, priests, and laity being thrown into the position of either going with the flow and participating in sacrilege, or resisting and becoming the target of not only the heavies in Rome but many of their own colleagues, superiors, and inferiors. 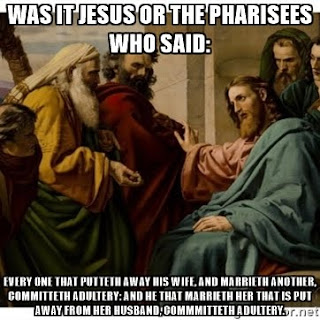 But to cheer us up, there is a very interesting and helpful interview with Cardinal Caffara to read, and canonist Edward Peters brilliantly summarises the fundamental confusions and incoherences of the Maltese statement. The Catholic Herald report on the Maltese document, by Dan Hitchens, says everything I would want it to say.

This crisis is truly separating the men from the boys in the Church. We can either side with Christ, and his difficult, demanding, but also beautiful words on marriage and divorce, or side with the Pharisees and their modern-day successors, who search out specious casuistical exceptions to the rule until the rule is no more: who nullify God's will by the traditions of men.

Once you start noticing how people sometimes accuse their opponents of the specific faults which they fear they have themselves, you start seeing it everywhere...

Support the work of the LMS by becoming an 'Anniversary Supporter'.
Posted by Joseph Shaw at 12:22 pm