The Complementarity of the sexes: embarassing but indispensible

The complementarity of the sexes is is beautifully illustrated by men taking their hats off, and women putting hats or mantillas on, in church: there is a difference between them. This is the basic point of the Position Paper on Headcovings which I've introduced on Rorate Caeli and discussed on this blog yesterday. This symbolic role, however, is part of the reason why liberals don't like the practice: they don't want to hear about complentarity. They want 'gender' to be a social construct, which ought to be a personal choice, and irrelevant to what one does in life.

Now, people have begun to notice that same-sex marriage is very difficult to resist if you accept contraception. Accept that sex, and indeed marriage, needn't have any connection with procreation, and it becomes impossible to explain what is wrong with homosexual sex, and homosexual marriage. The resistance of Evangelical Christians to SSM is, therefore, very difficult to maintain. Well, we have resisted that concession, so perhaps we are ok.
But a similar problem arises with sexual complementarity: if marriage is not based on differences between the sexes, then why should it be limited to people of different sex? Right, say the Catholic apologists, let's wheel out the doctrine of sexual complementarity to deal with this. You can read all about it in the Catechism of the Catholic Church, in the section on homosexuality (2357; cf 2333).

But the problem is this. Catholic apologists actually find the issue of complementarity very embarrassing. They realise it is necessary as a reply to homosexual activism, but they are desperate to say as little about it as possible. The very same Catechism of the Catholic Church which uses it against homosexuals, does not even mention it in discussing marriage. (Here's the section: search it yourself.)

There is more. Pope St John Paul II understood that sexual complementarity was absolutely necessary as part of the explanation for why we can't have women priests. He said lots of nice (and true) things about women in Mulieris dignitatem. But what he doesn't say much about men. Ok, Mulieris dignitatm is about women. But won't anyone say anything about men? If men and women are different, and we have all this stuff to say about women being 'spousal' and representing the bride-Church, what are we going to say about men?

The horrible, horrible truth, which Catholic apologists would apparently rather be flayed alive than admit, is that the thing which is complementary to the spousal Church is the authority of Christ the Bridegroom.

Priests, most obviously, represent Christ, they act in persona Christi, in their liturgical and sacramental and pastoral functions. Women represent the bride-Church, so to speak, the congregation. But as St Paul makes explicit, and as the apologists desperately need, yet desperately fear, to acknowledge, this complementarity is not limited to the role of clerical men vis-a-vis a feminised laity. The relationship between the clergy and the congregation is mirrored in the relationship within marriage between the sexes. The authority of the priest over the congregation is paralleled by (those of a nervous disposition look away now) the authority of the husband over the family. 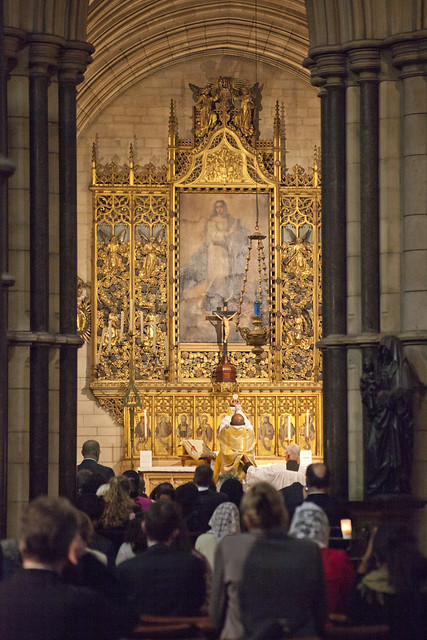 Is this teaching of Scripture, all of the Fathers, and, obviously, of the Catholic Church, reiterated in the Catechism of the Catholic Church? You must be joking! Can you imagine a Catholic bishop today, or a mainstream Catholic theologian, allowing this irreformable teaching to be dragged out of him? Neither can I. But silence about it is, in fact, a huge problem.

It creates the impression that in the Church all authority is clerical authority: clericalism.

It creates the impression that talk about the special dignity of women is just a sop to the ladies to compensate them for not being allowed priestly ordination, and doesn't flow from a coherent view of the roles of the sexes with which we are actually comfortable.

It creates the impression that the Church has nothing nice to say about men: reading some apologists, one is tempted to say that men are just second-class women, and should become as like women as possible if they want to become holy.

These are some of the reasons Catholic apologists have a hard time dealing with modern issues. They have tied themselves into knots to avoid saying certain unsayable things; the things they think they can still say, however, don't make very much sense on their own.

It is also among the reasons why the current generation of Catholic leaders and apologists have failed Catholic men, so few of whom can be found in the typical congregation.