Headcoverings: a new Position Paper from the FIUV 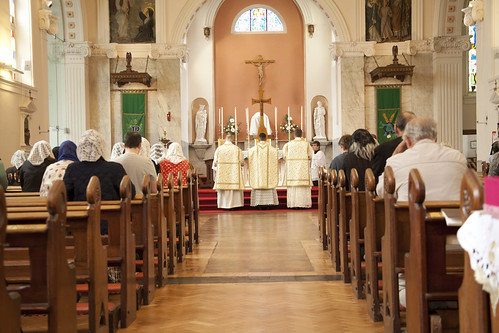 Today I am publishing a Position Paper on head covering in church: go over to Rorate Caeli to read it. This post is by way of some additional commentary on the subject.

The issue of ladies covering their heads in church may seem like a hornet's nest that we should just avoid kicking. For peculiar personal reasons the very idea causes apoplexy among some older, liberal women. It makes the traditional movement seem not just old-fashioned but wedded to an anti-feminist set of ideas which puts it beyond the pale of civilised discussion for great sections of the population. The idea that there might be some kind of moral pressure, if only from the example of others, on women new to the Traditional Mass that they adorn themselves with some absurd lace article, is obviously going to put loads of people right off the whole thing. So why don't we just shut up about it? That would obviously include not continuing the practice, since it is the very sight of women and girls in these things which draws attention to it first and foremost.


Traditional Catholics are not shutting up about it. Online, they are going on and on and on about it. There are loads of video testimonials from young ladies themselves on the subject, and the practice is spreading. There are still plenty of uncovered ladies at the Traditional Mass in England today, but more are plucking up the courage to wear a mantilla ('chapel veil'), or something equivalent. The very counter-cultural nature of the practice makes it attractive. The more the liberals attack it, the more it becomes a badge of honour.

Like so many liberal arguments of the 1960s and 1970s, the attack on head coverings for women looks, with hindsight, terribly unconvincing, a muddled historical and theological contrivance to placate modern and Protestant sensibilities by destroying something distinctive in Catholic culture.

The argument was, in a nutshell, that women were (oppressed and) wore headcoverings in St Paul's day, so there can be no theological significance to the practice. This makes all the classic mistakes: it mischaracterises what the Catholic practice actually is; it utilises an utterly lazy account of the original cultural context; and it ignores the arguments in favour of the practice, in this case expressed in Scripture itself. (Or have the liberals removed St Paul from the canon of Scripture on account of his being an old misogynist?)

3. By what authority do we ignore the extended theological argument which St Paul gives for the practice in 1 Cor 11:1-16? Supposing it really was the fashion of the day, can we just ignore what the Holy Spirit is teaching about it in this passage? By all means set it in its context in order to understand it; that doesn't give us license simply to ignore it: contrary to some liberals, the two things are not the same.

St Paul tells us that women should efface their glory (their hair) to give glory to God, and compares this to a bride: they represent the Church, the bride of Christ, in her purity and holiness. Men uncover their heads to symbolise the Christ to whom they themselves must be subject. This is a beautiful teaching with a beautiful manifestation in the symbolic gestures of the worshipers.

The liberals hate it, however. They hate the idea of women coming under the authority of a husband, but the bigger target here is the submission of the Church to Christ. Because if the Church is submitted to Christ, then she will proclaim the teaching of Christ. And as we have seen on the subject of divorce, that would never do.

More needs to be said, however, on the issue of the complementarity of the sexes, and I shall say some of it in another post, tomorrow.