Christmas offer for priests from the Latin Mass Society

We have been given some liturgical odds and ends. Among these items there are no fewer than 24 burses, 14 of them white. 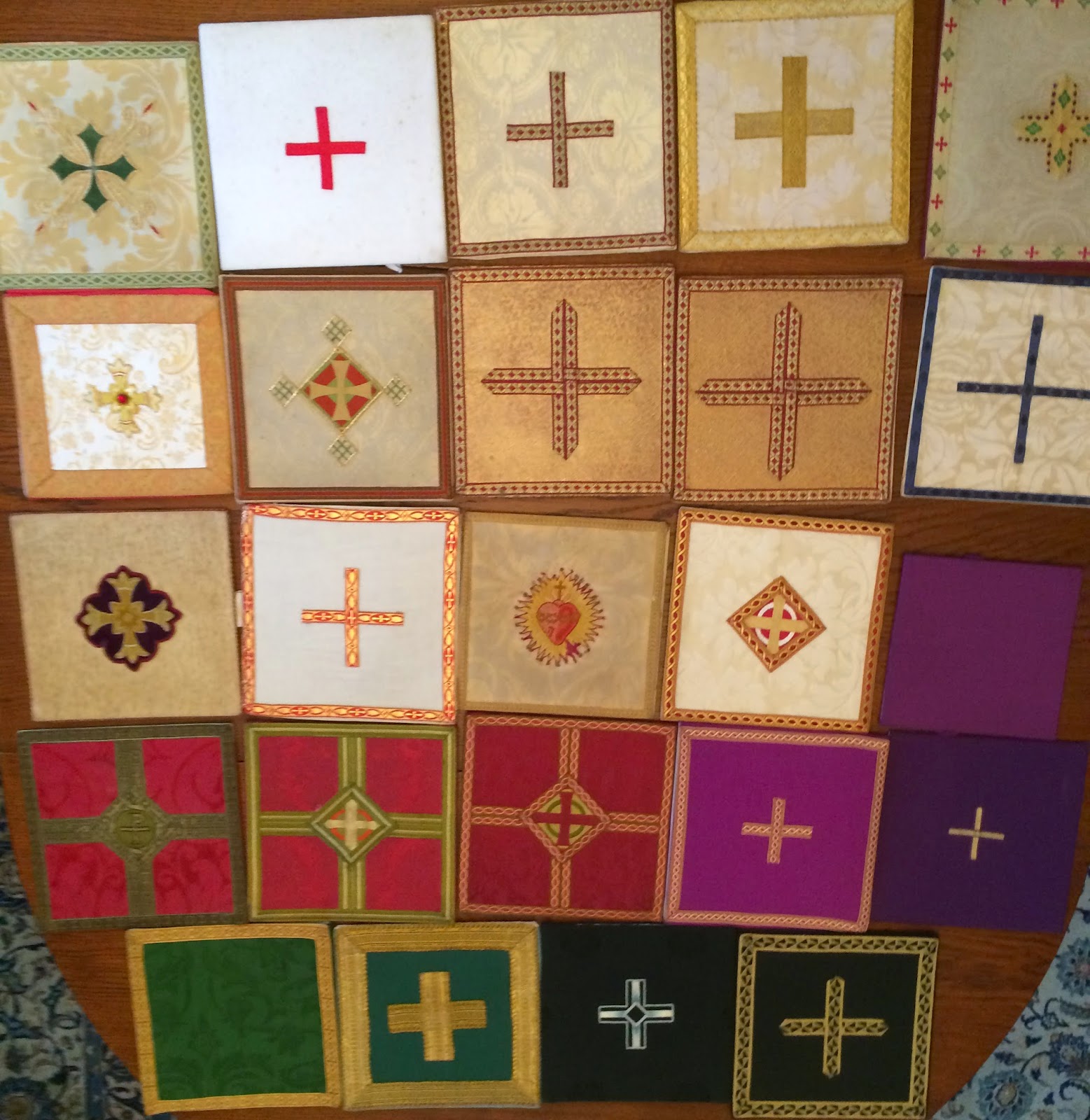 There are also a large number of stoles, again most of them are, for some reason, white.

The Guild of St Clare may find some of these useful for completing sets and to demonstrate how things are put together. But no one needs 24 burses or a dozen white stoles. None of the burses match any of the stoles. The collection's previous custodians were the outgoing Local Reps for Hexham and Newcastle, Mr & Mrs O'Neil, who received many of them from a local priest, and personally rescued others from being thrown away.

The annual meeting of Latin Mass Society's Local Reps has already had a look (there were previously even more of them!). What I propose now is that any Catholic priest or deacon in the United Kingdom (I'm thinking mainly of the cost of postage here) can have a white stole and / or a burse, the latter in whatever colour he fancies: put your name and address in the comments box, what you'd like (specify 'third on the right' if you like), and I'll post them out to you after Christmas at no charge (well, perhaps the priests can say a Mass for the LMS).

If you want more or if you are outside the UK get in touch and we'll talk about it. There are a few stoles in some other colours, for example.

They are all in pretty good condition. They are a little creased and some are a little grubby, but none need serious repair. None are of museum quality, they won't be of any interest to collectors, but they are all usable, from an aesthetic point of view, and many are rather nice. There are no polyester horrors.

The burse is a stiff square item a bit like an envelope or purse; it is used for carrying the corporal to and from the Altar. (The corporal is the linen cloth upon which the Host sits before and immediately after the Consecration.) Like the maniple, the burse is not mentioned in the post-Vatican II books, although I get the impression that they are still quite widely used in the Ordinary Form. I can only assume that a large number of churches in Hexham and Newcastle decided to chuck out all the burses at some point, some of which were then rescued. Perhaps the maniples which might have been chucked at the same time found alternative homes more rapidly; there are only a couple in this collection and I think I can find homes for those locally. I can't explain why so many of the burses are white, or why all these white stoles have ended up in this collection. For the really modern priest, the stole is the only liturgical vestment which shouldn't be jettisoned, and deacons need them as well, though they wear them differently.

But perhaps these stoles were too traditional in pattern for modern tastes. Modern stoles are longer than the traditional kind, and hideous fabrics and ghastly hues are favoured. Many sacristies have been purged by people, often self-appointed sacristans, suffering from allergies to silk and hand embroidery. Such a person, if sufficiently self-righteous, only needs to be in charge for a few minutes for irreparable damage to be done to a collection of vestments. It can be like the Passover of the Angel of Death...

Let us, if we can, give these items a chance to fulfill their proper function again. There were, after all, made with care and devotion for the service of the Altar in continuity with the Roman tradition; they deserve better than to be tossed onto a skip.