Baseball hats in church in Hexham and Newcastle 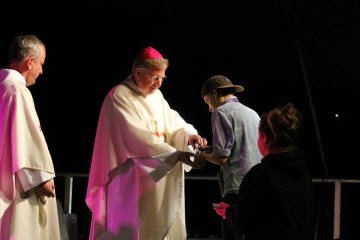 There has been a lively correspondence in the diocesan newspaper of the diocese of Hexham and Newcastle about this photo, which appeared illustrating a story about a 'Youth Village', a gathering organised by the diocese' 'Youth Ministry'.

It apparently did not occur to the editors of The Northern Cross that there was anything amiss in this picture of a young man presenting the gifts to Bishop Cunningham, and in response to a letter pointing out that something was amiss (which is on the website here, for the time being) there came an avalanche of letters defending the young man, Which of course rather misses the point. Evidently, no one in the Yoof Ministry had catechised him about the significance of men taking off their hats in church. I wonder if they had catechised him about anything else. That certainly isn't the young man's fault. You can't reap where you have not sown.


There is a lot which should be said about the patronising attitude of Yoof-oriented liturgy and other events organised from the top down, in the Church. It is striking that those initiatives which have grown up from the grass-roots, for young Catholics, are of a very different character: the Faith Movement's events, the Evangelium Conference, the Juventutem movement, and the St Catherine's Trust Summer School and Family Retreat. Events organised without the big institutional money-bags, and the institutional links to corral clients from Catholic schools and parishes, live and die by their success with the young people themselves. We know, because we've done it, that children and young adults are perfectly happy with even quite a lot of liturgy and catechesis if it is not dumded-down, patronising, and embarrassing. The official Yoof ministry people can merrily put one generation of Catholics off the Faith and just move on to the next cohort of victims.

The specific point of the photograph, however, is the issue of men wearing hats in Church. In the 1917 Code of Canon law, the obligation for men to uncover their heads is given greater prominence than the obligation of women to cover them. Canon 1262.2:

Men, in a church or outside a church, while they are assisting at sacred rites, shall be bare-headed, unless the approved mores of the people or peculiar circumstances of things determine otherwise; women, however, shall have a covered head and be modestly dressed, especially when they shall approach the table of the Lord.

It is interesting to see the obligation of men extended to outside events (such as open-air Masses), when men would at that time naturally have worn hats outside, whereas the obligation of women is tied more to the reception of Holy Communion.

It's it odd that no-one seems to think that this obligation was oppressive to men, when in fact it would have occasioned noticeable discomfort in outdoor settings, either from the sun or from the cold, and represented a deviation from normal practice. Women, on the other hand, are effectively told: just do what you'd do anyway, wear something on your head.

Today fashions have changed, and the obligation is no longer in canon law, though the Scriptural basis of the obligation, St Paul in 1 Corinthians 11, is still there, between 1 Cor 10 and 1 Cor 12. Since few people wear hats or anything else on their heads in the West, it is the practice of women putting something on in church which now strikes us as surprising. The only thing which has survived is a general sense that men take off their hats inside, which is actually quite a recent thing, as these drawings of the House of Commons demonstrate: men, like women, were entirely comfortable wearing hats indoors into the 20th century. Taking them off in church or, in Protestant practice, taking them off specifically for prayer in church, was a dramatic gesture.

The contrasting obligations on men and women in Scripture and the old Code are the really interesting thing. I shall soon be publishing a Position Paper on this subject.

Support the work of the LMS by becoming an 'Anniversary Supporter'.
Posted by Joseph Shaw at 12:34 pm