Loftus and the time-warp

This weekend you'll find a feature article by me in the Catholic Universe. But here I'm going to talk about an article in its sister paper, the The Catholic Times.

Mgr Basil Loftus treats us to one of his historical paradoxes (The Catholic Times, Christmas double issue, dated '19th and 26th December'):

St Anselm, the Archbishop of Canterbury when William the Conqueror invaded Britain - so I don't need to tell you the date - wrote...

Well blow me, I thought it was the Saxon, Archbishop Stigand, who was governing the see of Canterbury in 1066. He was succeeded by Lanfranc in 1070, and St Anselm didn't take up the post until 1093: not only some time after the Conquest, but several years after William the Conqueror had died (in 1087).


But then perhaps I am missing something. For Loftus, making the 27 years and two Archbishops vanish is nothing. For the substance of the article makes twice that amount of time disappear, namely all the time between the present and some euphoric moment in the 1960s.

He treats us to a fairly typical peroration.

Imperfect individuals, which we all are, often form imperfect families. Those families come together at Christmas around a festive table. Love sanates disagreements. Why then, whatever their imperfections, can these families not also come together, divorced and remarried, same gender couples, those who practice contraception, and simply cohabiting couples, at the table of the Eucharist. Can we not now move on from allowing law to separate us from Christ, when so very often loves clearly unites us with him?

Yes of course, Basil. Let them all approach the table of the Lord. Having made themselves ready, obviously: in Pope St John Paul II's words, with 'due care to approach the sacrament of Penance so as to purify one’s conscience.' ((1980) Dominicae Cenae 11). Or, since our venerable Mgr has been talking about Bl Paul VI's teaching on conscience, let's quote him, a passage with all the more weight as he was quoting, at some length, the Council of Trent:

It is unfitting to take part in any sacred function without holiness. Assuredly, therefore, the more that Christians perceive the sacredness and divinity of this heavenly sacrament, the more must they take every care not to come to receive it without reverence and holiness, especially since we have the frightening words of St. Paul: ‘For those who eat and drink unworthily, eat and drink damnation to themselves, not discerning the Lord’s body’ (1 Cor 11:29). Those wishing to receive communion must be reminded of St. Paul’s command: ‘Let a man examine himself’ (1 Cor 11:28) (Immensae caritatis (1973))

It seems puzzling to many people that such preparation, this 'self examination', should be necessary, but it is the same with the sacraments of Holy Orders, Marriage, Confirmation and Extreme Unction: we should prepare, spiritually, to receive them, if we want to gain the graces they offer. If we don't, we are not going to receive graces, we are going to be adding sacrilege to our other sins. Baptism and Confession also require preparation, of course, but as 'Sacraments of the (Spiritually) Dead' they are designed to benefit those in a state of sin.

Aren't all the sacraments there to help us live a Christian life? Indeed they are, and the different sacraments are designed for the different stages and states of life, to help us over every inch of our earthly pilgrimage. What Loftus is demanding is that this specialisation of purpose be ignored.

But what of our eternal state? Is this human community going to avail us when the separation from God on earth, so easily remedied by repentance and confession, becomes the eternal separation of hell?

I am a sinner. But I hope to go to my grave without this on my conscience: that I ever discouraged a fellow human creature in a state of grave sin from reconciling himself with God in confession.

Prepare yourself, dear reader, for the coming of Christ, as a Child in the stable of Bethlehem, and in your heart, by allowing a priest to free you from your sins. 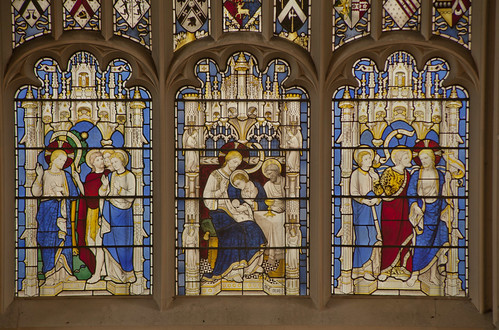 More photogaphs of the chapel and its glass are here.