To understand ISIS, look at Anglicanism 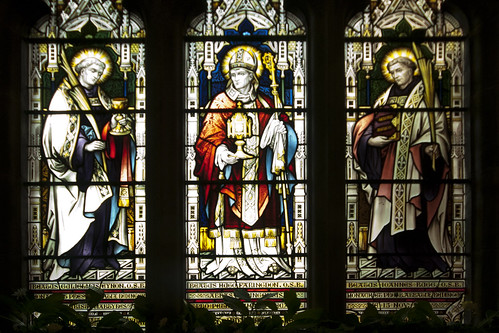 Update: I have responded to some of the comments on this post here.

Chalk and cheese, the Islamic militants of ISIS and Anglicans? Actually, they have a lot in common.

Remember that Anglicans were, on contemporary accounts, behind the most savage religious persecution in Europe at a time when standards were high: the 16th century.

Persecutions are tempered by political realities: you can't be too nasty to too large a section of your population, or you undermine the good will necessary to govern at all. ISIS are really pushing at the limits of what is possible, arousing the opposition of a lot of different people. The Anglicans did the same: their religious measures caused serious rebellions in the reigns of Henry VIII (the Pilgrimage of Grace), Edward VI (the Western Rising), and Queen Elizabeth (the Northern Rebellion), not to mention regular uprisings in Ireland. Their policies were the root cause of a horrible civil war in England, another one in Scotland, and a still more savage conflict in Ireland.

If anyone wants to say I'm being unfair, I'll say here right away that ISIS is definitely worse. I'm not interested in moral equivalence, but a conceptual parallel. Let me explain the parallels I have in mind, in three points.

Anglican savagery was based on the idea that Catholics were idolatrous, and toleration would bring the wrath of God down on the land. 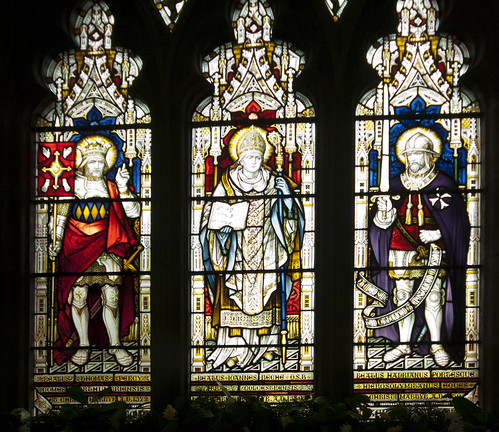 Like ISIS, and unlike the usual 16th century Catholic way of dealing with Protestant minorities, persecution by Anglicans was aimed not at suppressing the public proclamation and promotion of a dissident faith, but at stopping the dissident population practicing their religion at all. They would search out secret chapels in private homes. They would imprison people or even execute them for having a rosary or Catholic devotional book in their possession. The first move of the movement was the destruction of Catholic shrines. This motivation makes the persecution much more savage and the persecutors much more intractable.

This is exactly what ISIS is doing and why.

Anglican persecutors were always terrified of being outflanked by more extreme groups.

From its inception Anglicanism was criticised for being too 'popish' by people who regarded a plain white surplice as unacceptable pomp and the sign of the cross at a baptism as unacceptable ritualism. Any deviation from the most pure form of Protestantism, and the most uncompromising opposition to Catholic toleration, was seized on by these groups, who in the English Civil War and in Scotland actually got the military upper hand, and meted out some persecution to the Anglicans themselves.

This fear is at work with Islamist groups as well: they are in a 'race to the bottom' with all kinds of set-ups as to who can be the most pure and extreme.

Why, then, did Anglicanism turn into the drippy nonsense we know today? A third point of parallel.

Anglicanism produces over time a cultural elite who don't take it very seriously.

Protestantism has as a foundational principle Luther's as-ever subtle and charmingly expressed dictum: Reason is a whore. The separation of Faith and Reason means that people interested in Reason - intellectuals of all kinds - are forced away from the Faith. The Protestant suspicion of religious art has the same effect on artists.

In the 18th century, people interested in ideas and in art were, as a result, not terribly interested in Anglicanism. They poured their considerable resources into country houses, but by the beginning of the 19th century people began to notice that the cathedrals and parish churches were falling down, and no one had bothered to build new ones for the new industrial centres. As a state church, Anglicanism was for a long time dominated by establishment types who didn't actually believe in all that much, whose successors are the liberals of today.

There was a religious revival in the 19th century, but Anglicans were faced with the possibility of reviving in two opposite directions: a Catholic direction, and in the direction of a reassertion of Protestant principles. Both of these tend to lead out of institutional Anglicanism.

The anti-rationalism of revivalist Protestantism is exactly paralleled by the anti-rationalism of revivalist Islam, which has the same problem. Having rejected reason and (great swathes of) art as a matter of fundamental theology, historically they have developed elites who aren't very pure in their interpretation of Islam. These elites are then overthrown by zealots. And the process starts again. 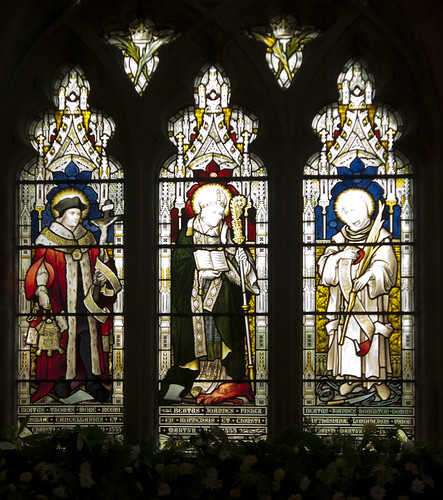 Pictures: Catholic martyrs from the windows of Belmont Abbey.

Support the work of the LMS by becoming an 'Anniversary Supporter'.
Posted by Joseph Shaw at 9:40 am