Loftus: another attack on the Ordinariate

Just to keep up to date, here is the ever charming Mgr Basil Loftus in his Catholic Times column of 25th July.

Impressively, Francis' merciful discernment also extends to, and embraces, those whose main preoccupation in the Church seems to be the slave-like observance of the law in all its minute detail, the continuity rather than the reform of Church practice, and an inward-looking and cultic liturgy, rather than an outward thrusting service of others through evangelisation.

He has inherited an Anglican Ordinariate, for which he showed a distinct lack of enthusiasm when Archbishop of Buenos Aires, and a virtual liturgical 'sect' for those who, in pursuit of the celebration of Tridentine-rite Masses, are now allowed to function without either the permission or oversight of diocesan bishops. Deftly side-stepping any difficulties which may be seen to arise from his immediate predecessor's positive enthusiasm for these bodies, Francis seems to be following Winston Churchill's guidance in the 1920s with regard to the position of the Irish Republic in relation to the British Empire - he respects their decision 'to exclude themselves within' the Catholic Church.

Indeed, he positively sympathises with those whose special liturgical needs can only be served in these ways, ...

Unlike you, then, eh, Basil?

The inclusion of the Ordinariate within Loftus' predictable ranting about the Traditional Mass reveals a few things. For all that he pays lip-service to 'evangelisation', he clearly doesn't like the biggest evangelising initiative of the English-speaking world for a century: an opening to Anglicans. Is this 'inward looking'?

Again, it can't be that Loftus is really concerned about an excessive focus on 'continuity' at the expense of 'reform', because the Ordinariate liturgy is, for Catholics, new, the most thorough reform of the liturgy since 1970 - by a very long chalk.

What he really objects to is not that we, trads and Ordinariate Catholics, too conformist, too inward-looking, but that we aren't conforming, we aren't looking inward to the stagnant Catholic community which clings to the forms and structures of the 1970s.

Again and again, theologians writing about the problems of Mass 'facing the people' point out that it creates a community which is not open: not open to God, or to outsiders. Instead it is something cosy and safe and this-wordly.

Pope Benedict said it created a 'closed circle', the The Spirit of the Liturgy.

The theologian Max Thurien, writing in the official Vatican journal Notitiae, wrote:
The whole celebration is often conducted as if it were a conversation and dialogue in which there is no longer room for adoration, contemplation and silence. The fact that the celebrants and faithful constantly face each other closes the liturgy in on itself.

Loftus' own hero Cardinal Schonborn said, in a retreat preached to Pope John Paul II:
Yet how important such signs are for “incarnating” the faith. The common prayer of priest and faithful ad orientem connected this cosmic “orientation” with faith in the Resurrection of Christ, the sol invictus, and with His Parousia in glory.

(References in the Position Paper here.) 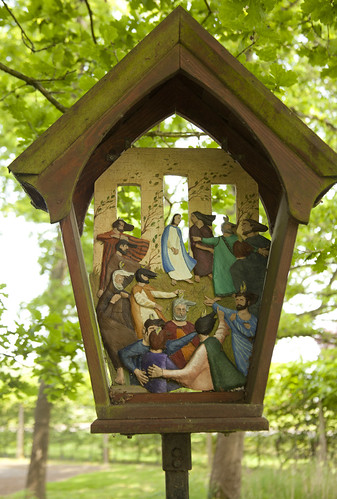 It is above all a fear of this opening to the Lord which, I am convinced, motivates Loftus and those who think like him. They talk endlessly of the traddy option, and now also of the Ordinariate, as the too-safe option, an option which fails to leave 'safe harbours' and the like, but clearly the problem is that it takes them right out of their comfort-zones. It is scary because, as Loftus writes, this worship is cultic: it has to do with God, that is to say it is really and truly something supernatural, it can't be presented just as a group of friends who all agree about everything meeting up for a meal.

Now this really is a bit frightening. If you get in touch with God, anything can happen.