Last night Andrew Burnham, Bishop of Ebbsfleet, addressed a packed meeting of the Newman Society on the subject of Anglicanorum Coetibus. I was there. (Picture: Bishop Burnham is introduced by the President of Newman Society, Hubert MacGreevy. Behind him are pictures of the Virgin and Child and John Henry Newman. The talk took place in the Catholic Chaplaincy.) 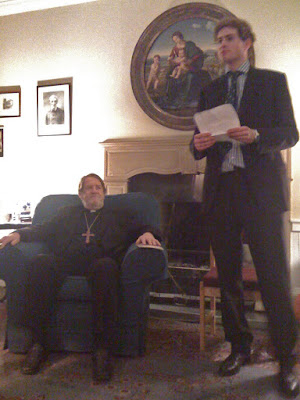 Andrew Burnham is the Anglican Bishop of Ebbsfleet and one of the 'flying bishops' who has been ministering to Anglicans who can't accept the ordination of women since these ordinations were authorised in England in 1994. He and his fellow 'flying bishops' administer a third of the country each, looking after any parishes who sign up for this.

I don't intend to give a summary of his talk but here are a few of the things he said.

First of all, the Apostolic Constitution on the Anglicans was a response to discussions he had with the Congregation for the Doctrine of the Faith and also with Cardinal Kaspar of the Pontifical Council for Promoting Chrisian Unity about two years before it was published. It is also a response to discussions between Rome and the Traditional Anglican Communion, and no doubt other groups and individuals, but in no sense is the English 'Forward in Faith' / 'flying bishop' set-up a side issue for the Apostolic Constitution.

When he was first ordained in the Anglican church the 'Anglo-Papalist' position was to recognise the Pope and work to re-unite Anglicanism with him. This was not such an extravagent view since the ARCIC talks seemed to be heading in this direction, but eventually the issue of the ordination of women pulled Anglicanism the other way. When he was made a 'flying bishop' he did so on the understanding that he would be continuing this stalled ecumenical project. 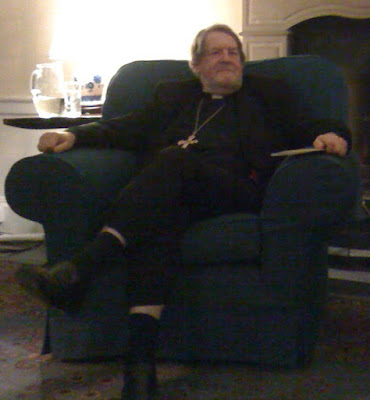 Since 1994 he has worked to create a sense of community among the very idiosyncratic and geographically scattered Anglo-Catholic parishes under his care. A good deal of progress has been made, making it much more likely that a good proportion of them will be able to come over to full communion with Rome as a body. His ideal would naturally be that they all came over, but this is clearly not going to happen.

He was very interesting on the subject of how the typical Anglo-Catholic parish is similar to, and different from, a Catholic one. Anglo-Catholic parishes tend not to have medieval buildings; they are the successors of the High Anglicans who built churches for the unchurched poor in the growing cities of the 19th Century. Their liturgy tends to be the 1970 Missal in English, distinguished outwardly from that of a Catholic parish mainly by the hymns. But they do have a different attitude to church-going: whereas a Catholic, at least a serious-minded one, will go to great lengths to get to some Mass or other on a Sunday if things disrupt his usual routine, an Anglo-Catholic who can't make the usual 9.30 service won't bother going to something else instead. They are very attached to their physical church, and lack the sense of 'Sunday obligation'. The attachment to the church, as has often been pointed out, will be a sticking point for many in joining an Ordinariate.

He was cautious not to make any promises about what he or anyone else would do, and when, but is was clear enough that he is going to join the Ordinariate and will be bringing others with him. Nothing will happen until the Anglican Synod debate on provision for Anglo-Catholics when women are ordained to the episcopate: he said he didn't want to go down in history as the man who scuppered the chances of a good deal for Anglo-Catholics staying in the Anglican Communion.

On the Ordinariate itself, he said that what happened after 1994 was that Anglican clergy who wanted to 'swim the Tiber' and become Catholic priests received three years' training before ordination. This created the problem that by the time they were back in circulation the Anglican laity who might have gone with them had dispersed. The key issue with the Ordinariate is to make possible the continuity of the communities and pastors so that whole groups will be able to come accross together.

Bishop Burnham spoke with great fluency and charm, in a witty and self-deprecating way, and without notes. His talk was less than an hour long and there are many issues which he didn't settle, but it gave the audience many important insights into the situation.

As I have written before (and here), the conversion of groups of Anglicans is a matter of great interest to Traditionally-minded Catholics, for a number of reasons, not all of which may seem obvious.

First, the Anglican converts we have seen since 1994 and, come to that, since 1558, have been a huge boon to the Church, in terms of their talents and zeal; many convert clergy have come to the Latin Mass Society's Priest Training Conferences.

Second, the existence of an Ordinariate with a certain Anglican spirit and its own hierarchy is itself exciting. I do not accept the argument often made by Anglicans that 'if England is to be Christian again, it will only be in the uniquely English way represented by Anglicanism': Edmund Campion, Richard Challoner, and Pugin are quite English enough, to my mind. Nevertheless, the Ordinariate will clearly remove psychological obstacles to conversion for many Anglicans, and that is a good thing.

Third, it will create a degree of legimate diversity in the English Catholic Church which will be healthy. Fr Aidan Nichols OP argued forcefully at the LMS Priest Training Conference at London Colney last Summer that we need to recover a sense of legitimate diversity. In the past the Catholic Church was far more characterised by a diversity of Missals and also by jurisdictional complexity than it is today. The monolithic Post-Vatican II uniformity of the Church has in many ways been stifling.

Whether or not they make use of the 'Anglican Use' based on the Book of Common Prayer, parishes in the Ordinariate will have far fewer qualms about allowing the Traditional Mass. And they will also serve as a model of jurisdictional diversity, of a very similar kind to that proposed for Traditional Catholics in the context of the reconciliation of the SSPX.

So we await developments with interest!
Posted by Joseph Shaw at 10:07 am