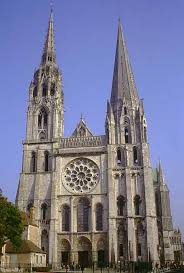 Apologies for slow posting, I am in the final throws of preparations for the Chartres Pilgrimage.

Even though I think the Hans Kung story is hilarious. Who'd have thought the pompous old liberal would turn into a legalistic sede vacantist in his twilight years?

I'll be doing some live blogging and twittering from the road to Chartres, so keep an eye on the blog and subscribe to my Twitter feed if you are on Twitter. Last time I went, two years ago, I did a lot of Facebook stuff, uploading pictures. I'm not gong to do that again because I've gone off FB, it is now rubbish with the IPhone, and it is of limited value with my limited circle of 'friends'. And every time they change the format I hate it a bit more. So this is a test for my live blogging technology.

Among other things I'm sure all the pilgrims will be keeping the SSPX-Rome negotiations in their prayers. The SSPX has its own pilgrimage which goes the other way, from Chartres to Paris, we pass each other (at least distantly) halfway. These two pilgrimages, taken together, are I think the biggest devotional annual event in Christendom, so this outpouring of prayer and penance must count for something.
Posted by Joseph Shaw at 4:57 pm