I've had the bug that's going round this week, hence the silence of this blog, but here's to catch up a little.

Last Saturday I should have been in two places at once: the Latin Mass Society's Confirmations at Spanish Place, and the LMS and Guild of St Clare stall at the Towards Advent conference. So naturally I was at neither: the Schola Abelis was having a training day in Oxford, with the brilliant Christopher Hodkinson. There just aren't enough Saturdays to go around. All three events were extremely successful. At Spanish Place there were more than twenty candidates, and the sacrament was conferred by Bishop Alan Hopes. It is great to see children, young adult cradle Catholics who didn't get round to getting confirmed at school, and adult converts of all ages, receiving this great sacrament, with the traditional ceremonies. The numbers are impressive, now that this is no longer the only EF Confirmation service happening each year: this year there was one in the Wirral and one in Stoke on Trent. That is indeed Fr Tim Finigan assisting Bishop Hopes in the sanctuary, with Fr Rupert McHardy of the London Oratory. Fr Simon Leworthy, who is now the Chaplain to the Traditional Community at St Bede's, Clapham Park, is also there. See more photos. Fr Tim actually made it to the LMS stall as well as the confirmations, which just shows that he's better at bilocating than I am. (Actually with a fast car and a speedboat it was quite possible to get to Towards Advent before it closed after the service.) He's even blogged about it (twice). 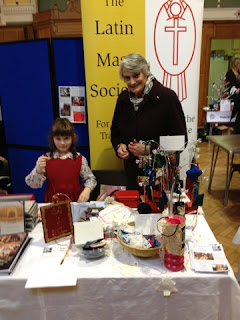 The Guild of St Clare, which shared the LMS stall (being affiliated to the LMS) raised £100 for training and made itself known to a lot of people. The training the Guild undertakes is serious: as well as passing on skills of all levels between members, they will soon be going to the Royal School of Needlework for a specialised course. They also go on outings of a more generally educational kind: to Beckford Silks, and the Victoria and Albert Museum. There are well-established groups now in London, Birmingham and Oxford, and the affiliated children's groups were very involved in making the Christmas Tree decorations and other nik naks which were sold at the stall. 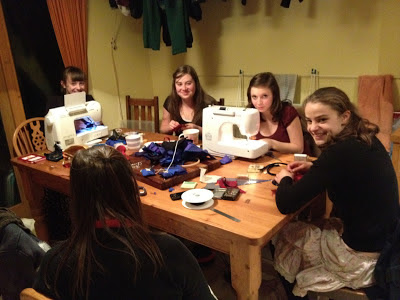 Is this not what tradition means? The picture above shows one of the older, and one of the younger, members of the Guild at the stall. If the one on the right passes on what she knows to the one on the left, this means that skills which were being taught at schools in the 1950s will be understood and used, God willing, in 2050s, when the younger lady (pictured, who turns seven today, as it happens) will still be under 60.

Can we prevent the complete dissolution of that culture and knowledge which once could be taken for granted in the Catholic Church in England and Wales? With a bit of effort, we can. Don't take your skills to grave: don't let your children grow up ignorant of these essential things. Get involved!