The Fruits of Pre-Conciliar Catechesis

Daphne McLeod, the Chairman of Pro Ecclesia et Pontifice, has been carrying on a lively correspondence in the Catholic Herald, defending her view that the problems of the Church since the Council have been overwhelmingly due to the failure of the 'new catechetics' which followed it. Specifically, in England all Religious Education teachers had to be retrained by an institution called 'Corpus Christi College' which was a hotbed of heresy, and was finally closed down by Cardinal Heenan. By then, Mrs McLeod tells us, its work had sadly already been done.
Tellingly, she explains that the English translation of the Council's document on education, Gravissimum Educationis, did not appear until 1971, when Corpus Christi College was already closed. The claim that 'the Council' had demanded a revolution in the content and method of religious education was revealed to be completely false, but too late.
'By their fruits you shall know them', Mrs McLeod says: because it has led to lapsation, the new catechetical method is shown to be problematic. However, she does not really address the point made by the previous letter, by a certain Martin Elsworth, that if catechesis was so wonderful before the Council, how was it that things collapsed so rapidly after the Council? Why, we might ask, did adults with this old catechesis fall for every absurd theological fad after the Council, or even give up the practice of the Faith? Why were Catholic RE teachers - of all people, surely the vanguard of the 'well-instructed laity' praised by Cardinal Spellman - so easy to brainwash with a lot of nonsense? Why did no-one think to ask any of the Latinists, so plentyful in the 1960s, what Gravissimum Educationis actually said? Why, in short, was the generation educated between the 1930s and the 1950s led to their destruction, like sheep to the slaughter, with so little resistance? A generalisation to which, of course, Daphne McLeod is such an honourable exception.
It is of course quite possible to check for oneself what pre-Conciliar Catholics were taught: many of the most influential texts have been reprinted, and they are indeed far superior in orthodoxy to much of the stuff written since then. I have before me a copy of the Baltimore Catechism Number 4: this is the teacher's manual, with the fullest treatment of each topic. What does it say about Infallibility? Naturally it tells us that it only extends to ex cathedra statements by the Pope on matters of faith and morals, and that on other matters, or in other statements, the Pope can err. But then it adds:

"Nevertheless, whatever the Pope teaches on any subject you can be pretty sure he is right."
Is there a distinction between matters of discipline and policy in which we should follow even wrong-headed commands for the sake of unity and to avoid scandal, and 'unjust commands' which it would be a sin to follow?
Is there a discussion of cases of the Popes treating the saints badly, and how they responded?
Is there a distinction between policies and prudential judgements, in which one Pope may contradict another, or indeed himself, and matters of Church teaching, in which we should adopt a hermeneutic of continuity: i.e., we should understand what Popes and Councils have said as harmonising if at all possible?
Is there a distinction between basic matters of faith, which as St Robert Bellarmine said should be just obvious to the Faithful, and about which they should never tolerate false teaching from anyone, and more complex matters on which the ordinary laity might best be encouraged to follow the teaching of Pope and Bishops even when they are unsure its orthodoxy?

Is there any discussion of the different levels of authority, or the credence due to past Councils and the Ordinary Magisterium, which should take priority over what is reported as being an off-the-cuff remark by the present Pope, since after all such reports are constantly subject to distortion, tendentious reporting, and misunderstanding? 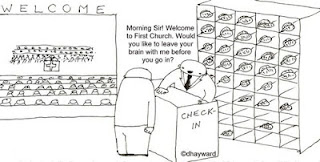 No, no, no, no, and again no. The teaching of the Baltimore Catechism is one-sided and deficient, and it failed. I should be interested to know if any other catechetical handbooks of the era do better than Baltimore Catechism on this topic, but I don't get the impression that they did. What is more, the ultramontanism of the Baltimore Catechism is still the dominant ideology of many neo-conservatives, even as they reject so many other Catholic assumptions of the day, including the trenchant defence of the Temporal Power of the Papacy which can be found in the catechism's very next pages.
See also my blog post on Daphne McLeod's claim that Trads aren't interested in catechesis;
and a series of posts on the notion of obedience.
Posted by Joseph Shaw at 5:34 pm