Ratzinger on the OF-EF divide: Sacrifice

First off, a little disclaimer. I don't normally engage in direct criticism of the Novus Ordo, and I'm not exactly doing this here. I leave carping about the details of the 1970 Missal to those many liturgists across the spectrum of opinion who want to revise it: they are, after all, the experts. My brief is to talk about the value of the Old Mass, which may have no implications for the OF, it may complement the OF, it may suggest something could be improved in the OF, or whatever - insofar as I can leave that open I do.

There is no contradiction between the two editions of the Roman Missal.  In the history of the liturgy there is growth and progress, but no rupture.  What earlier generations held as sacred, remains sacred and great for us too, and it cannot be all of a sudden entirely forbidden or even considered harmful.

Now, the liturgy speaks to us at many levels, and it is quite natural that it should be pregnant with teaching and that people should pick things up from it. It can also be misunderstood. In the Extraordinary Form, the claim that the priest 'turns his back on the people', interpreting his facing East as ignoring the Faithful or even holding them in contempt, is such a misunderstanding. It happens with the Ordinary Form too. An interesting feature of many of the permissions for liturgical innovations is the plea for catechesis or preparation of the Faithful to head off misunderstandings: preparation which of course never took place. The Holy See was particularly worried about the possibility of misunderstanding Communion in the Hand and Female Altar Servers.

So, on the Sacrificial nature of the Mass. It is well known that sacrificial language was heavily pruned back in the liturgical reform. The traditional Offertory Prayers are full of it and they were cut completely. The traditional Collects and particularly the Secret prayers had a lot and this has pretty well all gone. Bugnini makes the point that he wanted to avoid anything which would give offense to Protestants, and indeed many Protestants do happily use texts similar or identical to the Ordinary Form. Bugnini wanted to cut the Roman Canon, but it has survived as an option ('Eucharistic Prayer I'). This all happened in the context of an attack on the theology of sacrifice, and we have all been told since 1970 that the Mass is a 'shared meal'; popular treatments frequently skate over the sacrificial nature of the Mass, or ignore it completely. This would be impossible with the text of the EF.

This is what Cardinal Ratzinger said.

(‘The Theology of the Liturgy’ in Looking Again at the Question of the Liturgy with Cardinal Ratzinger: proceedings of the July 2001 Fontgombault Conference ed. Alcuin Reid, pp18-31, p20)

‘A sizable party of catholic liturgists seems to have practically arrived at the conclusion that Luther, rather than Trent, was substantially right in the sixteenth century debate; one can detect much the same position in the post conciliar discussions on the Priesthood.  ... It is only against this background of the effective denial of the authority of Trent, that the bitterness of the struggle against allowing the celebration of Mass according to the 1962 Missal, after the liturgical reform, can be understood. The possibility of so celebrating constitutes the strongest, and thus (for them) the most intolerable contradiction of the opinion of those who believe that the faith in the Eucharist formulated by Trent has lost its value.’

What he is saying is that these theologians, who deny the sacrificial nature of the Mass, want to extirpate the 1962 Missal because they see clearly that it contradicts what they want to say. The Ordinary Form does not, or at least not in an 'intolerable' way.

2. He affirms that what is (without any misunderstanding, and agreed by all) the implications of the Old Mass is correct: it is the teaching of the Church.

3. Going beyond this passage, it is clear that, whatever Bugnini or any other individual intended to do in creating the Novus Ordo Missae, none of them - not even Pope Paul VI - had the authority to alter the teaching of the Church on the sacrificial nature of the Mass. It is part of the Deposit of Faith. Therefore, it didn't happen. 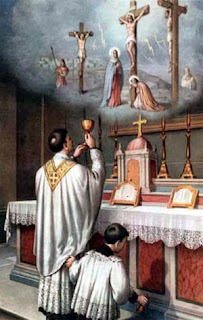 4. As a matter of fact, the changes made to the liturgical texts are (in this respect) ones of subtraction: references to sacrifice are systematically expunged. The texts of the OF do not explicitly deny the theology of sacrifice: indeed, Eucharistic Prayer I affirms it, however rarely it is actually used.

5. Given all this, we may say that the attempt to infer a non-sacrificial theology of the Mass from the Novus Ordo is a misunderstanding. It may be a reasonable one, or not: that's another question. Any liturgical or magisterial text must be read against the background of the whole Tradition: this is the Hermeneutic of Continuity. We should take account of the whole teaching of the Church in coming to understand any particular document. That includes using later documents to interpret earlier ones, since the Church can grow in understanding the implications of the Deposit of Faith. The Fathers help us understand Scripture, and so on.

So is there a rupture, or not? Is there a problem with the Novus Ordo, or not? Yes and no. There is a clear rupture in the silencing of a lot of sacrificial talk in the Mass. But there is no rupture in the Church's teaching, because there cannot be. So what we might think is implied by the NO (particularly by its silence or ambiguity) should be set aside, if it conflicts with the Magisterium or the earlier liturgical tradition. What is implied by the Traditional Mass, on the other hand, is still valid.

To spell it out: the Hermeneutic of Continuity does not mean that we pretend the texts are the same. It means that we read both sets of texts in light of the whole Teaching of the Church. We may think that doing this is a 'forced' reading in some cases, or that it goes against what the people actually composing it wanted to say. But those people and their intentions are not normative for what the Church means by these texts. The liturgical rupture does not create a theological rupture because the Church's teaching cannot change. The past, the Tradition, cannot be rendered invalid.

We have uncovered here an enormously important reason why the Extraordinary Form must urgently become a part of the liturgical life of the Church again. It conveys a theological teaching which not only true but very much in need of reassertion.

Labels: EF & OF: how are they related?, Reform of the Reform