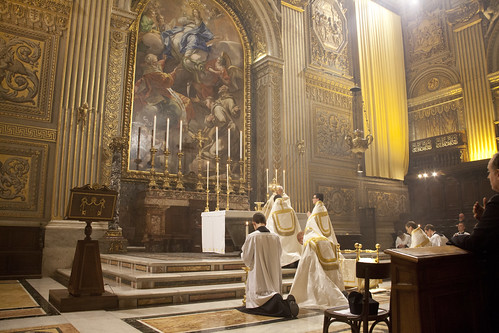 The publication of the latest 'Scalfari interview' has presented an extraordinary spectacle. Fr Lombardi, the Vatican spokesman, tried to play the interview down, saying (not for the first time) that the atheist journalist Scalfari had taken neither notes nor a recording of the conversation - and nor had anyone else.

The Catholic Herald reported that Fr Lombardi
'released a statement confirming that the article “captures the spirit of the conversation” between Pope Francis and journalist Eugenio Scalfari, but cautioning that the “individual expressions that were used and the manner in which they have been reported cannot be attributed to the pope”.

Suggesting that the “naïve reader is being manipulated” by certain portions of the article, Fr Lombardi expressed particular skepticism about two statements attributed to Pope Francis: a claim that some cardinals have been guilty of sexually abusing children, and a vow to “find solutions” to the “problem” of priestly celibacy.'

Clearly Fr Lombardi is caught between saying the whole thing is a load of rubbish - which would imply criticism of the Holy Father, who has persisted in talking to Scalfari after all the problems which emerged after the first interview - and saying that it represents what Pope Francis actually wants to say, which seems problematic because (as it is presented) it appears to lack diplomatic tact and to give hostages to fortune on things like clerical celibacy.

A similar dilemma seems to have the Vatican website administrators in its grip. The Holy Father wants to give an interview; he's happy to see it published; the administrators live to serve the Holy Father, so up it goes on the website. The Holy Father does not, however, appear to see himself in any sense bound by what he is presented as saying, it doesn't in any formal sense represent his views, it causes some embarrassment, so it comes off again. And then it goes back up, and then ...

Certainly, Pope Francis has his bag-carriers and diplomatic pooper-scoopers in a spin. I don't envy them their job. I don't, however, think that Pope Francis is much concerned. Here is my humble take on it.

The Holy Father is not much interested in theology. I don't mean that as a criticism: not all prelates have a background in theology. In the Church's career-structure, there are people who start out as professional theologians, like Pope Benedict, philosophers like St John Paul II, diplomats like Pope Pius XII and Paul VI, and (less commonly) pastorally-oriented people like St Pius X. Not only that, but the Church includes people with all kinds of attitude and character. Pope Francis says 'I am a son of the Church', when he wants to qualify some of his impatient-sounding remarks about 'casuistry'. My take is that he takes his belief in the teaching of the Church for granted, he doesn't lie in bed struggling with doubts, far from it, but he doesn't view the practical problems which face the Church as manifestations of deep theological problems, in the way that Pope Benedict did.

Perhaps one might say that Paul VI was more inclined to view the practical problems of his day as manifestations of diplomatic problems, St John Paul as philosophical problems, St Pius X as pastoral problems. I'm just talking about a tendency, here; to repeat, this needn't be a criticism of anyone. To a hammer everything looks like a nail. So what does Pope Francis see them as? 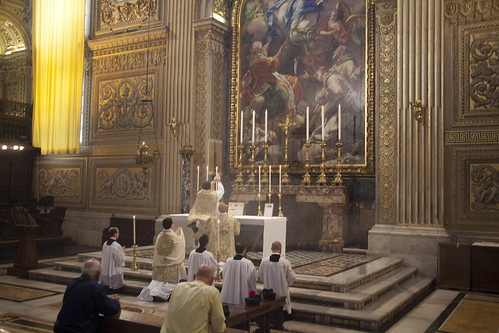 From what I gather, Pope Francis has a very acute political sense. He is concerned about politics, in the sense that he thinks about groups of people with particular interests, concerns, and attitudes, which need to be dealt with by the use of particular kinds of language, concessions, and symbolic gestures, or else (when necessary) opposed, sidestepped, or neutralised, in a political fashion. This is, of course, a hugely valuable skill to have. It enables him to get through to people who would not normally be open to his message, and it may mean he'll be able to deal with the political infighting and sclerosis of the Curia.

So it is not surprising to see him doing some of the things politicians do. Politicians try ideas out with hints and leaks, to test the reaction while retaining the option of distancing themselves from the ideas if they turn out to be unpopular or problematic. Politicians can address different groups in different ways, and they spend a lot of time soaking up what people think and say, often in private or semi-public settings, and sounding as sympathetic as possible. Politicians tend to campaign for an idea or policy with arguments and speeches only after they've established a coalition in support of it; they often let single-issue groups, lobbyists and pressure groups, thrash things out first. A lot of their work is behind the scenes.

The political role is not so much a teaching role as a governing role: a role to smooth away problems which are less about concepts than about power relationships, and to identify groups in positions of influence who are blocking the proper functioning of institutions, and to deal with them.

Politicians aren't terribly popular, so it may be assumed that I'm being terribly rude, but I'm not. Politics is a necessary thing, and politicians have a necessary place in society. I don't think Pope Francis is corrupt, nor an ideologue with some dark agenda, so he has a big advantage over most politicians we are familiar with from secular politics. Nevertheless, to the extent I am right, he will suffer the temptations and limitations to which politics is subject.

One is the problem of appearing too maleable, too ready to say one thing to one group and another to another. I don't suffer the illusion that Pope Francis is a stuffy old conservative, but I do think that the long-term danger is not him allowing free love in the Church, but of raising false expectations among liberals. Having said that, they've been suffering these false expectations for so long that it's become part of the liberal package.

The other problem, which is related, is that the muted or mixed signals become a source of scandal, by which I mean a source of sin. Catholics who are not ideologically committed to liberalism but are weak in their Faith might jump to the conclusion that divorce and remarriage are about to be ok, for example, because of the use the liberals are making of what Pope Francis has said. Pope Francis has not slapped the liberals down; on the contrary, he seems to be encouraging them. For the time being he wants to see how this goes. Perhaps the very fact of a heated debate between Müller and Marx and the like will provide him with a political justification - as opposed to a theological justification - for maintaining the status quo on divorce. But in the meantime the Faithful are confused.

They are confused already, of course, and the clearer teaching from the last two pontificates served only to establish one side of the confusion, the other side of which was coming from liberal priests and bishops. Now there are more conservative priests and bishops, and the liberal generation has reached the level of the older cardinals, who would be difficult even for the most conservative Pope to silence. Certainly, Pope Benedict did not manage it.

O time, thou must untangle this, not I.
It is too hard a knot for me to untie!

As I've said before in posts about Pope Francis, I want to understand him first and foremost. I'm open to the idea that he might be doing something too clever for me to see, but also to the idea that he will turn out not to be a good pope. Not all popes are good, after all. If we approach every issue with the assumption that the Pope is perfect, we are going to come to terrible grief sooner or later.

So far, Pope Francis has evaded the defences of some very hardened opponents of the Church, and he has embarked on a strategy within the Curia, of asserting control over the money, which might actually make some headway. Strategies come with risks. The danger of scandal through the toleration of heterodoxy is not exactly a new one. There are many precedents for well-meaning Popes to allow intractable problems to seethe for a bit before intervening decisively. And, come to that, not actually getting round to any decisive intervention.

In the meantime I think it is a pity that all those clerical bloggers have gone quiet. Without going berserk with scandalous attacks on the Holy Father, I think we can all contribute something by reiterating the teaching of the Church, and by reminding people that Catholics are not bound by the Pope's off-the-cuff remarks. I think Pope Francis is rather assuming that we, the traddy side of the debate, will carry on saying what we want to say about the issues of the day. If only because he thinks it is part of life's rich pattern. 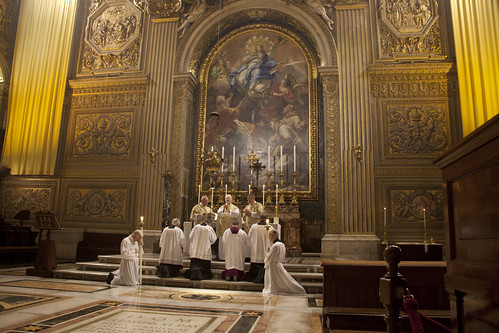