Here are two more Prayers for the Church against persecution.

The first is very familiar to those attached to the Traditional Mass: it is part of the Prayers After Low Mass. These were established in 1859 by Pope Pius IX (though not for the whole Church), when the Papal States were under threat. The prayers were added to and made universal by Pope Leo XIII. The prayer below is part of Pius IX's original version, though Pope Leo added the words 'the conversion of sinners, and': in other words, it was originally just for 'the liberty and exaltation of our holy Mother the Church'.

O God, our refuge and our strength, look down in mercy on thy people who cry to thee; and by the intercession of the glorious and immaculate Virgin Mary, Mother of God, of St Joseph her spouse, of thy blessed apostles Peter and Paul, and of all the saints, in mercy and goodness hear our prayers for the conversion of sinners, and for the liberty and exaltation of our holy Mother the Church. Through the same Christ our Lord.
R: Amen.

(Although it was always permissible to say them in the vernacular, Rome never produced an official vernacular version. This means that there are various vernacular versions in circulation, authorised by different bishops or groups of bishops. Don't panic if you know another translation! The one above is the one used in England.)

Here is another prayer from the Raccolta, the manual of indulgences. It was granted an indulgence in 1891, and again in 1935. 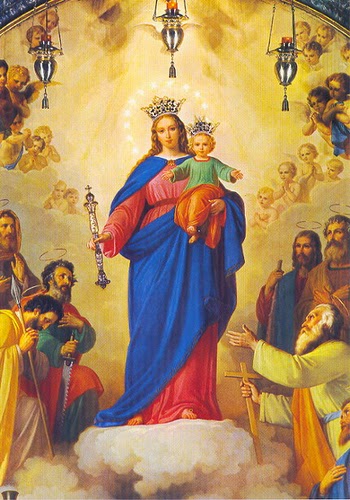 Prayer to Our Lady Help of Christians.

Virgin most powerful, loving helper of the Christian people, how great thanks do we not owe thee for the assistance thou didst give our fathers, who, when they were threatened by the Turkish infidels, invoked thy maternal help by the devout recitation of thy Rosary! From heaven thou didst see their deadly peril; thou didst hear their voices imploring thy compassion; and their humble prayers, enjoined by the great Pope, Saint Pius the Fifth, were acceptable unto thee, and thou camest quickly to deliver them. Grant, dear Mother, that in like manner the prolonged sighs of the holy Bride of Christ in these our days may come to thy throne and engage thy pity; do thou, moved anew to compassion for her, rise once again to deliver her from the many foes who encompass her on every side.

Even now from the four quarters of the earth there arises to thy throne that lovéd prayer, to win thy mercy in these troublous times even as of old. Unhappily our sins hinder, or at least retard, its effect. Wherefore, dear Mother, obtain for us true sorrow for our sins and a firm resolution to face death itself rather than return to our former iniquities; we are sore distressed that, through our fault, thy help, of which we stand in such extreme need, should be denied or come too late.

Rise, then, O Mary, incline thyself to hear the prayers of the whole Catholic world, and beat flat to the ground the pride of those wretched men, who in their insolence blaspheme Almighty God and would destroy His Church, against which, according to the infallible words of Christ, the gates of hell shall never prevail. Let it be seen once more that when thou dost arise to protect the Church, her victory is sure. Amen.

I've put all these prayers on a page on the LMS website.