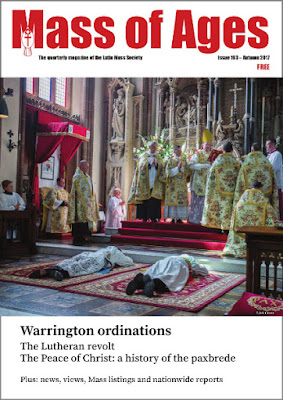 Mass of Ages is the quarterly magazine of the Latin Mass Society. It contains reports on our many activities across the country, national and international news of Traditional Catholic events, feature articles on different aspects of traditional Faith and culture, and opinions and views on developments in the Catholic Church.The autumn 2017 edition is now available. The cover article, History in the Making, is a report on the first Ordinations in the Traditional Rite in England for more than 50 years. Other features are Angels and devils, by Canon Amaury Montjean of the Institute of Christ the King Sovereign Priest on the writings of St Francis de Sales, Thirty years of the Old Rite, a history of the Traditional Mass on the Isle of Wight and The Peace of Christ, in which the LMS Chairman, Dr Joseph Shaw, looks at the history of the paxbrede.
Also in the edition of Mass of Ages:


Glorious tradition, in which Canon Gwenaël Cristofol, of the Institute of Christ the King Sovereign Priest, reports on exciting developments for the Institute in Preston, as they are given direct administration of English Martyrs’ Church in the city.
“The specific vocation of the new Shrine,” writes Canon Cristofol, “will be to make known the history, the fight and the fidelity of our English heroes of the Faith, and this link with this glorious tradition of the English Martyrs will give us all a boost in the missionary spirit.
Holy Mass in the Extraordinary Form and Adoration will take place every day, and Friday will be a special day of devotion and prayer to the English Martyrs, with the veneration of the relics preserved and venerated in this church for 150 years.  Friday is the day of the Passion, and it seems most appropriate to link the Cross to the persecution and death of the Martyrs.”
This, together with the founding of a school and a House of Discernment for young men over 18 years of age, is testimony to how much the Bishop of Lancaster values the presence and ministry of the ICKSP in his diocese.
Andrew Brayley discusses the published diary kept by Mgr (later Cardinal) Pericle Felici during Vatican II.
Barbara Kay, one of the LMS Assistant Reps for the diocese of Northampton, reports on The Guild of St Clare’s first ever Sewing Retreat.
Mackenzie Robinson remembers a special experience at Buckfast Abbey.
Our regular columnists:• Alberto Carosa talks to Coetus Internationalis Summorum Pontificum Secretary, Guillaume Ferluc, about the forthcoming Summorum Pontificum Pilgrimage to Rome.• Caroline Shaw looks at El Greco’s The Burial of the Count of Orgaz• Mary O’Regan on the Third Secret of Fatima• Paul Waddington, a Vice-President of the LMS, reports on the recent restoration of the wall paintings in the sanctuary and Lady Chapel of Sacred Heart, Caterham.• Fr Bede Row asks, “Do we still believe in Angels?”• The Lone Veiler on Holy Communion
There are book reviews by James Bogle and Annie Mackie-Savage. James looks at Luther and His Progeny, edited by John C. Rao, and Annie discusses a new book on marriage, Marry Him and Be Submissive, by Costanza Miriano, both of which are available from the LMS online shop.
If you do not live near a church which stocks Mass of Ages but would like a copy of the magazine, we would be very happy to send one from the LMS Office. However, due to the high cost of postage, we do ask that you cover the cost of postage. See here for details.
Support the work of the LMS by becoming an 'Anniversary Supporter'.
Posted by Joseph Shaw at 8:23 am