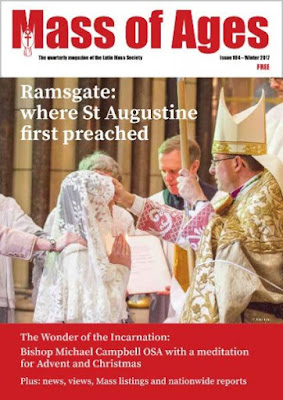 In this issue:
• Bishop Michael Campbell OSA, Bishop of Lancaster, leads us in to the great liturgical seasons of Advent and Christmas with a thought-provoking meditation

• John Coverdale reports on a magnificent work of restoration at St Augustine’s, Ramsgate
• In our series on Catholic traditions, Joseph Shaw looks at the history of the Christmas crib
•There is a review of Leo Darroch’s new book Una Voce: The History of the Foederatio Internationalis Una Voce 1964-2003 (copies of which can be purchased from our website) and much, much more.

Feature on St Augustine's, Ramsgate:
"Augustus Pugin is a name that should be on the lips of every Catholic in England... He became one of the most influential architects and designers of the nineteenth century, championing Catholicism and the Gothic style in everything…

"He said that building a church was the greatest thing a man can do, and that is precisely what he did in Ramsgate. For the greater glory of God, he created this ideal church where God could be worshipped according to the ancient rites of our Holy Mother the Church.”

St Augustine's was the home of The Victoria Consort. Recorded in the Shrine, their CD traces, in Gregorian Chant, the arrival of St Augustine in Kent and the re-establishment of Christianity in England from AD 596.

Feature on the Crib:
"...no Catholic family home is complete, at Christmas, without a Crib: a three-dimensional representation of the Stable at Bethlehem, with its inhabitants” writes Joseph Shaw. “The history of the Crib is an interesting one. It is clearly a cousin of the Medieval Mystery Play, another way of representing and making vivid key scenes from Scripture, which embedded them in the late Medieval Catholic imagination… The crib is a visual Gospel [a point made by Bishop Campbell in his meditiation] and its place in churches is entirely appropriate, as well as in private homes.”

Nativity scenes for your home are available from the LMS online shop.

“Leo Darroch’s important book contains valuable insights into every major development in the treatment of the Traditional Mass over the long period of time it covers, and makes clear the important role of the FIUV. It will be an indispensable work of reference for scholars and historians,
as well as being of interest to anyone who wants to become well informed about the treatment of our liturgical patrimony during its long time in the wilderness.”

Leo Darroch was a member of the LMS Committee from 1986 until 2012; Deputy Chairman to Christopher Inman, and converted the old-style A4 typed reports into a modern magazine style in the early 90s.

Read the full review in Mass of Ages. Better still, buy the book and read it for yourself!

Also included:
A homily preached by Mgr Antony Conlon in St Augustine’s, Snave.
Shaun Bennett remembers the Rev. Dom Antony Tumelty OSB.
Matt Showering reports on Tolkein’s devotion to the Blessed Sacrament.
Clare Bowskill reports from the recent LMS Latin Course.
Alisa Kunitz Dick tells about her experiences of teaching Latin and Greek to children.
Our regular columnists:
• Alberto Carosa reports on the 6th Summorum Pontificum Pilgrimage to Rome
• See photographs of our own celebration for the 10th anniversary of Summorum Pontificum
• In her Art and Devotion series, Caroline Shaw looks at The Nativity by Piero Della Francesca
• Mary O’Regan on the significance of the number 13
• Fr Bede Row asks, “Do we still believe in the Devil?”
• The Lone Veiler on ‘The war against women’

To help the Latin Mass Society continue its work of promoting and developing Traditional Catholic life and practice in the Church, please consider signing up to our Anniversary Supporters’ Appeal.

A digital copy of the magazine may be read HERE(link is external).

Support the work of the LMS by becoming an 'Anniversary Supporter'.
Posted by Joseph Shaw at 11:04 am