The cultural front-line in Oxford 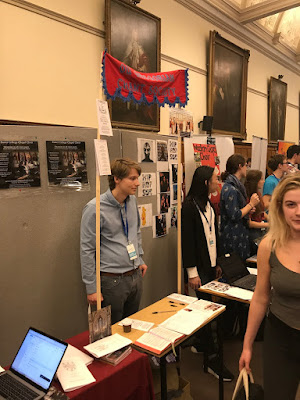 I have a piece on the Catholic Herald website. It begins:

Recently I spent many hours on the front line of the new evangelisation. In a formerly Christian country, Britain, where the cultural achievements of the Church are still remembered and appreciated, at least by some, I was working on the via pulchritudinis: the “way of beauty”.

“Nor should we overlook the positive contribution made by the wise use of the cultural treasures of the Church. … artistic beauty, … a sort of echo of the Spirit of God, is a symbol pointing to the mystery, an invitation to seek out the face of God made visible in Jesus of Nazareth.”

Where was I? At Oxford University’s Freshers’ Fair, as I am every year, recruiting singers for a Gregorian Chant schola named after an Oxford student who died for the Faith, Blessed Thomas Abel.
Read the whole thing there.
Support the work of the LMS by becoming an 'Anniversary Supporter'.
Posted by Joseph Shaw at 3:40 pm