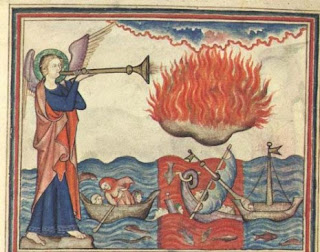 My latest in LifeSiteNews.

Immediately this was published someone in the LifeSite comment box appeared to say I am wrong: God is not punishing us. It's not me who needs to be persuaded, however, but the Holy Ghost who inspired so many texts in both Testaments about divine punishment.

What we should certainly avoid doing is trying to determine individuals' spiritual state according to the burden of suffering they bear. Perhaps such an extrapolation works in Budhism or Hinduism, but Christians are familiar with the fact that the saints frquently suffered, and sometimes the more God loved them, the more they suffered, and the greater their glory in heaven. But not always: you can't read off an inner state from outward circumstances the other way either.

-----------------------
In relation to an epidemic, we must exercise prudence and take seriously the consequences of what we are doing for the good of our neighbor. Exposing others to a significant and unnecessary risk of infection, for example, is a sin against justice. There is also a risk involved in excessive caution. Closing down all schools and businesses, were that to happen, would have a huge cost. To impose this cost on children and employers without sufficient justification would also be a sin against justice.
Of even greater concern are measures taken or considered that affect the spiritual good of the faithful. In nearly all cases, the response of bishops to the epidemic has been restrictive, public Masses being suspended in Italy being the most extreme, but the suspension of the Kiss of Peace or the Reception of the Chalice, at the less serious end of the scale, are now becoming widespread. All of these measures may, or may not, be justified; I do not have the expertise to judge. But what they have in common is that they are negative and reactive.
Continue reading.
Support the Latin Mass Society
Posted by Joseph Shaw at 9:57 am