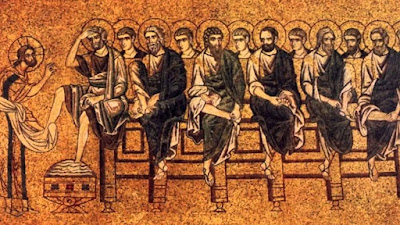 
In the Gospel of St. John, the focus of the account of the Last Supper is not the Institution of the Mass, but the “Mandatum”: Jesus’s command to the twelve apostles to love and serve each other. Christ introduces the point by washing their feet, usually, in the ancient world, the job of a slave. He is not setting aside His authority in doing this, but demonstrating what it is to have authority. To have authority over others is to serve them.
In the changes to the Holy Week services that took place in 1955, the place of the Mandatum, and its ritual washing of feet, was emphasized, though it remained optional. However, its focus was subtly changed. Before 1955, bishops and priests washed the feet of the poor after Mass, thirteen of them, and they were then given clothing and money. After 1955, it became part of Mass, and the people having their feet washed were more closely identified with the apostles: their number was reduced to twelve, and the connection with almsgiving was lost. The pre-1955 ritual was not a specifically clerical thing, but a survival of the once widespread practice of kings and queens, lords and ladies, abbots and abbesses, of washing the feet of their inferiors and giving them alms. British monarchs still mint special coins to give out on this occasion, though, sadly, they no longer wash anyone’s feet.
In this way, Christ’s example was understood as a model not just for clerical leadership, or the relationship between bishop and his priests, but about the nature of Christian leadership in general, religious or secular. As He says in the Gospel of St Mark, “Whosoever of you will be the chiefest, shall be servant of all” (10:44).
Continue reading.