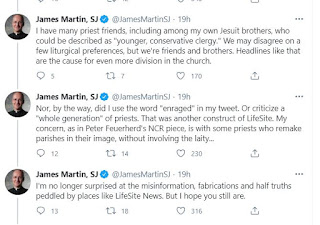 Me on LifeSite. Fr James Martin, who retweeted the article I discuss, is even more annoyed now than he was before. However, since I quoted his tweet in full I can hardly be accused of misquoting him.
-----

Fr. James Martin, SJ, has condemned younger, more conservative priests, linking to a National Catholic Reporter article that uses a parish’s experience as a jumping-off point to criticize a whole generation who are strongly motivated to oppose abortion, who are “active” and want to “evangelize,” who like Latin and incense, and — horror! — who read LifeSiteNews.

Fr. Martin commented as he re-tweets the article: “Essential reading: These are not isolated incidents and part of a growing trend in the church, leaving parishioners feeling angry and isolated. Essentially the rejection of much of Vatican II by younger priests, this phenomenon has flown under the radar.”

"I cannot tell you how many people have told me of experiences like this: parish councils disbanded, women removed from positions of leadership, parishioners being told they're "bad Catholics," after recently ordained priests decided to remake the parish in their image."

Read the whole thing there.
Support the Latin Mass Society
Posted by Joseph Shaw at 1:21 pm