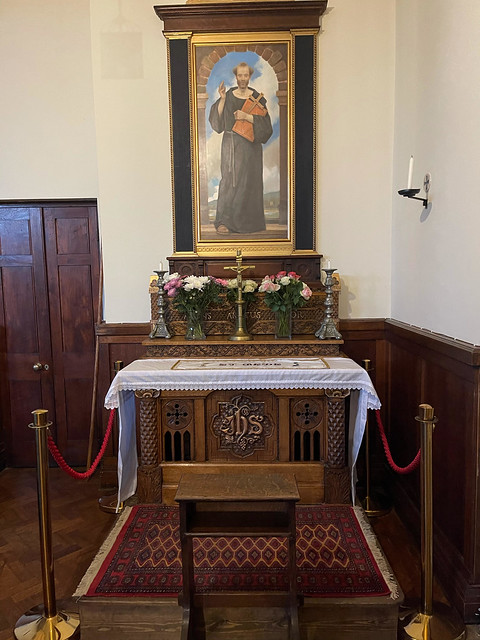 Last Saturday Fr Marcus Holden at St Bede's, Clapham Park, celebrated a High Mass of the Ember Saturday, for the repose of a benefactor of the Latin Mass Society, John Edward Arnell. The LMS has also sponsored a new side-altar at St Bede's in his memory, complete with a specially commissioned painting of St Bede, by the Catholic artist James Tildersley.
John Arnell, a resident of Nunhead in South London and a member of the LMS, died on 17th May 2017. We have an annual Mass for all our deceased members, but frequently have additional ones for people of special importance, such as our late Patron, Colin Mawby, which we managed just before the epidemic made public liturgies difficult. We've fallen a bit behind with these and we had originally planned this one for Mr Arnell for a year ago.
We know very little about him. We made an appeal for information in a local newspaper and found out that he worked for London Transport before his retirement. If anyone has more please email info@lms.org.uk. He is the Society's biggest ever benefactor, something which has particular poignancy as he was not an especially wealthy man. He had no close relations, and the LMS was his only beneficiary. For this reason we feel a special connection with him, and obligation to him.
This is the second big thing we have done in memory of Mr Arnell: the first was the purchase of a very special black High Mass set, which we now use on special occasions, such as our annual Requiem in Westminster Cathedral (below). Each large item in the set is now labelled with a request to pray for Mr Arnell. Coincidentally, we have used the central IHS motif of this set for our servers' guild medals.
Because it was the Ember Saturday of Pentecost, we could not, of course, use these vestments for last Saturday's Mass, which was not a Requiem. I hope that in the future they will be used for another Mass for him.
Requiem aeternam dona ei, Domine; et lux perpetua luceat ei. 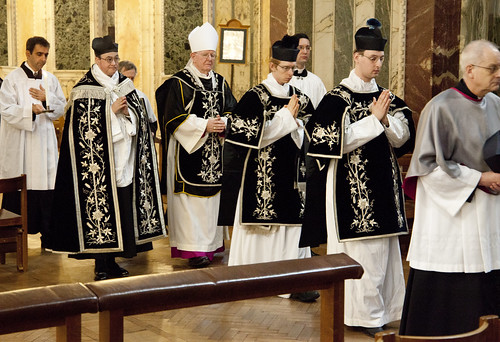