The Latin Mass Society regrets to report that Cardinal Vincent Nichols has made the decision (communicated to the Society by letter) that the Sacrament of Confirmation is not to be celebrated according to the 1962 liturgical books in the Archdiocese of Westminster. The annual celebration which has for nearly twenty years been organised by the Latin Mass Society at St James’ Spanish Place, at which candidates were confirmed by an auxiliary bishop of the Archdiocese—and on one occasion, by Cardinal Raymond Burke—will accordingly not take place this year, or until this decision is reversed.

We understand that another planned celebration of this Sacrament, by Archbishop Bernard Longley of Birmingham, has also been cancelled.

The Archdiocese of Westminster has provided an auxiliary bishop to confer Old Rite Confirmation annually since 2004; at these services 593 people have been confirmed. In recent years bishops in several other English dioceses have also organised traditional Confirmations in other parts of the country. These celebrations have been joyful occasions, attended by many children and young adults, their families, sponsors, and friends. They have been clear expressions of the importance the Society’s supporters attach to their link with their bishops, and our bishops’ pastoral concern for us. They have enormously strengthened the sense of unity in the Church: both our sense of belonging, and, I believe, the bishops’ own sense that we are indeed sheep of their flock.

The cessation of these celebrations implies the loss of much that the Bishops of England and Wales have sought, and achieved, in establishing a serene co-existence between the new and old liturgical forms. Confirmation is above all a sacrament for young people and converts. It will cut off many  from accessing it in a form ‘particularly suited to them’ (as Pope Benedict expressed it).[1] Others will be driven to seek it outside the structures of the Church.

We hope that the Bishops of England and Wales come to reconsider their decision, and allow once more the ancient Roman liturgy in all its manifestations to be part of the legitimate diversity of liturgical forms we have in this country.

Reading of the difficulties and conflicts between groups of the faithful attached to the Traditional Mass and their bishops, in some parts of the world, we have long been able to say, in England and Wales: this is not the situation here. With regard to Confirmation, and in many other ways, our bishops have shown themselves willing to see us cared for using those liturgical forms which are, as Pope Benedict called them, ‘treasures’, which attract us because of their ‘sacrality’, and in which we are ‘formed’ (Letter to Bishops, 2007).

This is no longer the case. While this situation continues, it is implied that the liturgy of the Saints, Doctors, Martyrs, and holy Popes of twelve centuries and more is suspect, and that we ourselves are not worthy of the pastoral consideration given to all sorts of groups in this country: Polish Catholics, Syro-Malabar Catholics, Ukrainian Rite Catholics, and many others, who receive pastoral care distinct from the standard English-language Novus Ordo liturgy.

I hope the Bishops of England and Wales appreciate the deeply problematic nature of this situation, particularly in light of the steps which Pope Francis has taken to legitimise the ministry of the Society of St Pius X, whose members will not feel themselves bound to observe any restrictions on the use of the Traditional Sacraments.

In light of the Canon law guidance which we have published, which confirms that the recent Responsa ad Dubia issued by the Congregation for Divine Worship, which appear to prohibit the use of the 1962 Pontificale, does not have the force of law, we call on His Eminence, Cardinal Nichols, and the Bishops of England and Wales, to reconsider their position, before real pastoral harm is done, and damage to the fabric of unity which will not easily be repaired. 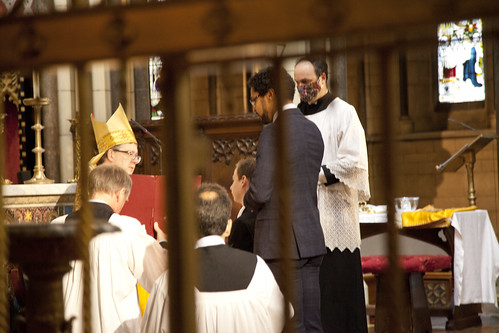 Support the Latin Mass Society
Posted by Joseph Shaw at 10:59 am