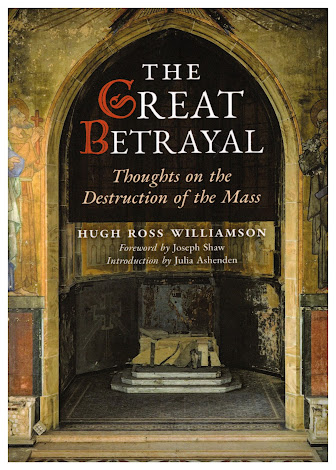 I am going to publish a series of reviews of short books suitable for light(ish) summer holiday reading, which appear in the current Mass of Ages, magazine of the Latin Mass Society.
This is available to buy from the LMS online bookshop.
Hugh Ross Williamson: The Great Betrayal: Thoughts on the Deformation of the Mass

Hugh Ross Williamson, a founding figure of the Latin Mass Society, composed two important pamphlets in the early days of the movement: The Modern Mass: A Reversion to the Reforms of Cranmer (1969) and The Great Betrayal: Some Thoughts on the Invalidity of the New Mass (1970). These have been republished by Arouca Press, with Preface by his daughter, Julia Ashendon, and a Foreword by me.

The central concern of both pamphlets is the replacement of liturgical texts with clear theological implications, notably on the sacrificial nature of the Mass, with ambiguity and silence. This happened above all in the new Eucharistic Prayers and the Offertory.

The same thing happened to clear language about the necessity of penance, the intercession of the Saints, sinfulness and punishment, and our need of God’s grace. This has been documented in Lauren Pristas’ The Collects of the Roman Missals and in Matthew Hazell’s Index Lectionum, and elsewhere.

Ross Williamson was correct in surmising ecumenism as at least part of the motive, as we know from the words of the architect of the reform, Annibale Bugnini. Again, he was right to worry about the effect this silence and ambiguity on the beliefs of ordinary Catholics. I quote Pope John Paul II in my Foreword (Ecclesia de Eucharistia (2003) 10): “At times one encounters an extremely reductive understanding of the Eucharistic mystery. Stripped of its sacrificial meaning, it is celebrated as if it were simply a fraternal banquet.” This would hardly have be possible if every Mass being celebrated included the traditional Offertory and the Roman Canon.

Hugh Ross Williamson worried that this theological ambiguity impinged on the objective intention of the rites as a whole, and could make them sacramentally invalid. To be fair to him, he proposes this as something to be investigated, not as something proven. My quick answer to this argument is that (apparently at the personal insistence of Pope Paul VI) the Roman Canon was retained, almost without change, in the reformed Missal, and this makes it impossible to say that this Missal as a whole is lacks a clear presentation of the theology of sacrifice. It must be admitted, nevertheless, that it is hardly an ideal situation that one must burrow into little-used options to find a clear expression of such an important aspect of the Church’s Eucharistic Faith.

Available to buy from the LMS online bookshop.