Review: Faith of our Fathers, by Chessman 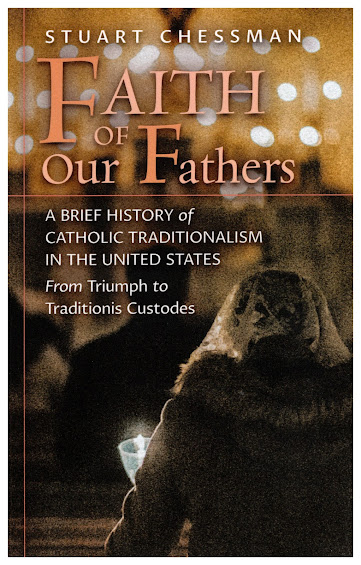 This appears in the new Mass of Ages, magazine of the Latin Mass Society.

This is available to buy from the LMS online bookshop: Faith of Our Fathers | Latin Mass Society (lms.org.uk)

Stuart Chessman: Faith of our Fathers: A Brief History of Catholic Traditionalism in the United States.

The United States is the location of a major part of what we can call the Traditional Movement, but over the decades it has not had a single, continuing organisation or institution to represent it or, for that matter, to keep records. Stuart Chessman, who bloggs at The Society of St Hugh of Cluny, has put together a number of articles about the American movement’s past and present, which will do something to prevent some important events and individuals it disappearing from public consciousness, notwithstanding the geographical bias of the book.

Chessman explains the early role of those ‘conservative’ Catholics who refused to get involved in the liturgical debate; the strengths, weaknesses, and eventual collapse of Triumph magazine; and its partial replacement by the Latin Mass Magazine. Chessman notes the eagerness of Triumph to rally round the papacy following the condemnation of artificial contraception in 1968, which led to a tension in the magazine’s position as it continued to document the institutional failures of the Church in America.

A similar rallying to the establishment cause by conservative Catholics took place in the latter years of Pope John Paul II’s reign. This was led by Opus Dei and the Legionaires of Christ, and took place despite the poor episcopal treatment of conservative institutions like Ignatius Press and EWTN. It was particularly unfortunate in blinding some conservative Catholic commentators to the grim beginnings of the clerical abuse revelations. Relations between conservative and traditionalist Catholics have, since then, been transformed for the better.

One useful feature of the book is its inclusion of some historical documents. Bishop Donohoe of Fresno threatening excommunication to traditionalists in 1976; a letter from Archbishop Weakland which had to be presented by those attending a permitted Traditional Mass in 1985; a questionnaire designed to ascertain the theological soundness of would-be Old Mass-goers from the Archdiocese of New York from the same year; and so on. It is well to be reminded of some of the sillier aspects of the persecution of Catholics who, as Pope Benedict was later to describe them, were ‘totally rooted in the faith of the Church’, and wished only to worship in continuity with their predecessors in the Faith.