Liturgy and the War in Ukraine: Inside the Vatican

I have an article in the latest edition of Inside the Vatican, edited by Robert Moynihan (May-June 2022).
It can most easily be seen online on ISSUU, though you have to buy one issue or take out a subscription if you want to read the whole thing. 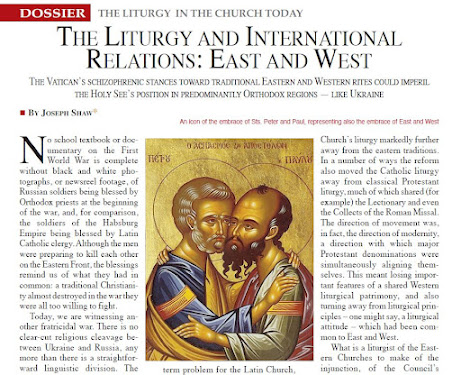 Good will implies that we take the religious values of the region seriously. The liturgical debate taking place in the Western Church, particularly after Traditionis Custodes, can leave one with the impression that the Western Catholics, at bottom, see the whole phenomenon of the Eastern Rites as faintly ridiculous, and accordingly that disagreements among their different groupings is little more than a squabble among foolish children. This impression will not be dispelled until the Holy See has made its peace with its own liturgical tradition, and gives it the place of honour which Pope Benedict XVI hoped for it, and from which Pope Francis has tragically plucked it.